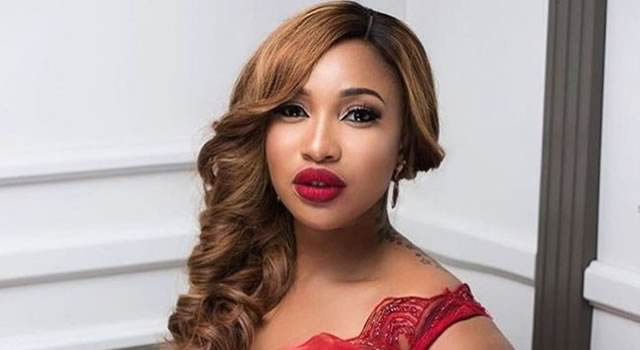 Days after blasting the chairman of the Actors’ Guild of Nigeria who threatened to sanction her over her constant attack of her ex-hubby Olakunle Churchill on social media, Nollywood actress Tonto Dikeh has denied reports quoting her to have said that she “can’t marry an Igbo man.”

The actress put a disclaimer on her Instagram page on the said interview she reportedly granted in 2012 where she purportedly blasted men from the Eastern part of Nigeria saying she could never marry them because they ”are too nosy”.

Tonto denied granting the said interview which also quoted her to have said that she was raised by a poor father and had to sleep under bridges to make a living before she became an actress.

She said: “I have heard and read a couple of times about this topic and I am actually totally shocked at this!!

“I have never granted an interview saying such nonsense, I am particularly from Igbo!

“I have always said it years back I didn’t have any Facebook account and anything at that time that came from Facebook under my name was not from me.

“I only just joined Facebook few years ago also and also made a disclaimer 8-years ago on Twitter about this issue!!

Read also: #BBNAIJA REUNION: Khloe in Dubai to chase her dream after revealing she felt betrayed by former housemates

“Also said by the invisible Tonto in the interview is that I was raised by a poor father and had to sleep under the bridge to make a living! Too bad.

“That’s far from my case, I came from a well-to do family and lived an average childhood with everything I ever needed. I also went to the best schools in my community!!

“Don’t get deceived by the interview, if I said it, I will boldly stand by it!!

“I no dey fear anybody face!!

“No media house can make claim to the interview, “so my people, these are not my words,” she added.

The latest outburst by the actress comes after she blasted AGN chairman Prince Ifeanyi Dike for threatening to sanction her over her outburst against her ex-hubby on social media urging him to hasten the sanction in a caustic post on Instagram.

The actress wrote: “I hope this fastens your sanction from your board!! Stupid fool you have not sanctioned the actresses going to dubia to open their mouths for old men to poop inside or the ones pushing drugs!!