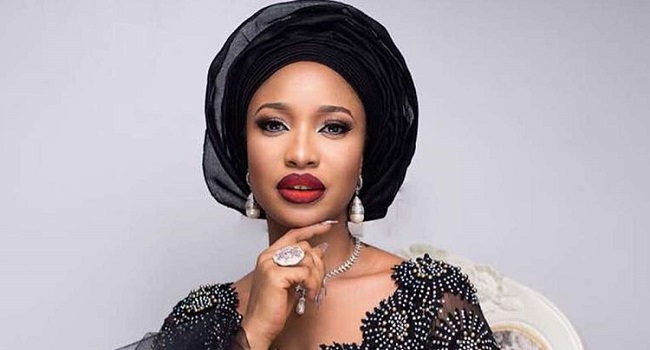 Controversial Nollywood actress, Tonto Dikeh has revealed that she has forgiven the father of her son, Olakunle Churchill.

The actress made the revelation on Sunday in a no-holds-barred Instagram session with Ovation publisher, Dele Momodu.

According to the actress who once referred to her estranged husband as a 40-seconds man, she has come to realise that forgiveness is not about the next person but one’s self.

Tonto said that she read a part of the bible where God said he wouldn’t forgive us if we do not forgive others.

“A man I love and respect always talked to me about Forgiveness, and I have come to realize that Forgiveness is not about the next person.

“Forgiveness is a whole lot, and I only just realized that the bible says that if we do not forgive, God cannot forgive us. All these things are in the bible, but it never really made an impact on me until someone explained it.

“I think forgiveness is essential for one’s growth.”

When asked if she has forgiven Olakunle Churchill, Tonto said that she has and wishes him the best henceforth.

“Oh yes, especially him. I forgive him and wish him the best, for my son’s sake. I do. Why not?”

She added that presently there is nobody she holds a grudge on but stressed that ‘there are people who she has forgiven but would never have a relationship with again.”

The actress later in the evening took to her official Instagram page to make clarifications on her reported scuffle with some security authorities in Dubai sometime in 2019 on an alleged drug related offence.

Tonto said that she indeed had a faceoff with Dubai authorities not because of drugs but because a guard called her a ‘prostitute’ in Arabic language.

She said that if she was caught with drugs according to some media reports, she should be in jail by now.

”Far from it. That incident in Dubai was not drugs because if it was I would be in jail. It had nothing to do with drugs or alcohol even.

“On that day, I was insulted by one of the guards. He said something very derogatory to me in Arabic, I think Lebanon. It’s called Sharamuta which means prostitute, it means a call girl and I was not so dressed.

“But it was a show, so I had like a very amazing bra inside and this blazer on top. To them, it is Haram when you are not dressed properly. So that is where all of the altercation started. That was the only problem, any other information is just false,” Tonto said.