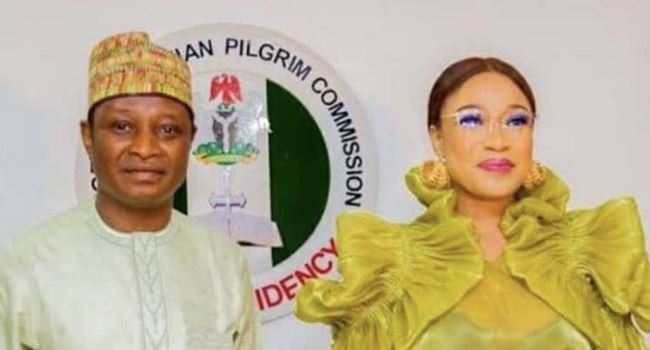 Nollywood actress, Tonto Dikeh is one of the most controversial thespians in the Nigerian movie industry. She is no stranger to controversies, as a couple of years back, she was the perpetrator of chaos and pandemonium.

Recently, Tonto Dikeh made headlines once again after her purported appointment with the Nigerian Christian Pilgrims Commission, (NCPC) was denied.

A statement of NCPC denouncing reports of selecting Dikeh as their Peace Ambassador came barely 24 hours after she claimed she was appointed on Instagram.

The actress took to Instagram on Thursday afternoon to publish a statement that she had been appointed by the commission.

In a post shared via her Instagram page on Saturday, February 27, 2021, the movie star said she did not lie about the appointment.

“My name is King Tonto Dikeh. Best believe I will never lie on any human being talk more of a commission of the federation. I can only simply say this is life and we all know what can go wrong in 1 sec,” she wrote.

“Coming from a place of leadership and peace, I won’t fight this. But I will walk away with my head held high and grow above it, thanks.”

The movie star’s response came after the commission came out to deny appointing her as an ambassador.

NCPC representatives maintained that the actress simply paid a visit, but that, there was never an official appointment. However, some have opined that she was quickly dropped due to backlash from religious individuals across the country.

The actress has revealed that she won’t be arguing with the body, instead, she will let it go.

In recent times, the Nollywood actress has preferred to abstain from controversies. A couple of weeks ago, she was coerced to make comments about her ex-husband, Olakunle Churchill’s marriage with his ex-personal assistant, Rosy Meurer.

Uncharacteristic of the actress, she never openly condemned the union of her estranged husband and his new wife. In time past, Tonto caused pandemonium on social media when she dubbed her husband, a ‘2-minutes man’ in 2019.

Tonto Dikeh has distanced herself from her old buddies such as Bobrisky, Anita Joseph, presenting a more matured demeanour on social media.

In the meantime, social media users have insinuated that NCPC denied Tonto’s appointment due to her controversial lifestyle. Some commenters questioned why a known Christian celebrity or Gospel artiste was not selected for the role; instead of a secular celebrity.

Asin the same Tonto Dikeh that we know….????

I don't have doubt that Tonto Dikeh was appointed as peace ambassador for the Nigirian Christian Pilgrim Commission. The commission had to deny due to the backlash. pic.twitter.com/86ZchYSpTr

Mike Bamiloye is there is they are looking for actors. If you want someone younger, Woli Agba is there. We can even manage Kenny black. Tonto Dikeh loun loun. Must be ment.

While I’m not a Moral Police to determine if Tonto Dikeh is suitable to be appointed an Ambassador for Nigerian Christian Pilgrim Commission,good for her.

However, should the Govt waste funds on Religious pilgrimage, that office should be scrapped.

Actually, i see no reason why we are complaining, if Tonto Dikeh was actually given the job. Someone said why not Mercy Chinwo or Sinach
Did you ever ask God, why he chose Saul i.e Paul? Are you better than her? Be reminded that "sin na sin"
Good morning.