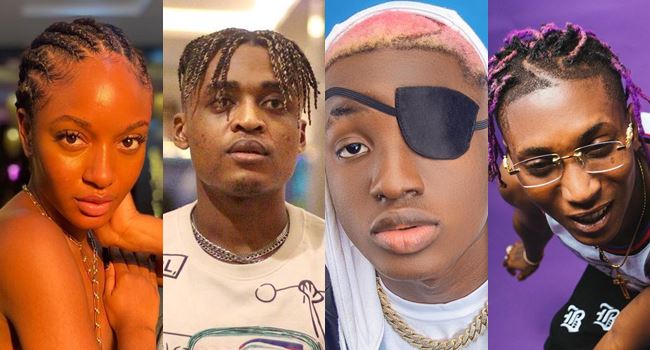 They are young, fresh and hungry; they are here to bless the world with their talents and ideologies. Ripples Nigeria presents the top 10 new artistes that we expect to set 2021 on fire, musically that is.

Every year, there are always unique stars that emerge from the nothing. When you think you’ve heard or seen it all, someone will crispy vibes reminds you why it is quintessential to maintain an open mind and flexibility.

In 2020, we saw the rise of Omah Lay, his EP, Get Layd recieved massive airplay and he became a national treasure. He won his first major award at the recently concluded Headies Award ceremony.

He was honoured with the award for the ‘Next Rated Artiste’, a well deserved recognition.

In 2021, several youngsters are already impressing their listeners with their charm and ability. They are making a statement for themselves, it is only a matter of time before they become mainstay in the entertainment industry.

In the meantime, here is list of artistes that we expect to set 2021 on fire.

Ayra Starr is signed to Don Jazzy’s Mavins Records. Her introduction came with her self-titled EP in January 2021.
She already has several hit singles under her belt.

DMW’s Liya is another spectacular act that has got everyone talking since her introduction in the latter part of 2020. She is signed to Davido’s record label, DMW.

She was introduced to Davido by the Nigerian singer-songwriter, Peruzzi. Liya has been identified as the queen of Davido’s DMW.

In 2020, Cheque introduced himself with the single hit, ‘zoom’. His rap infused style of music with Afro beats has set him apart from his counterparts. He has quickly registered his name in the hearts of music lovers; however, more is expected from him this year.

He is good, but there is still room for improvement.

Speaking of improvement, Bella Shmurda is expected to continue building from where he left off in 2020. He had a fascinating 2020, as his songs, ‘Cash App’ and ‘Rush‘ were everywhere, garnering massive play on various streaming platforms. Indeed, Shmurda recieved the love and admiration that he deserved one year ago.

He was also nominated in the ‘Next Rated Artiste’ category at the 2020 Headies Award. The award was given to Omah Lay.

Bella Shmurda already worked with Olamide, Davido and other notable stars in the music industry, more will be expected of him this year.

The 21-year-old youngster has been developing behind the scenes for about a year and was officially unveiled by Jonzing World last week.

Jonzing World, helmed by D’Prince in affiliation with Mavin Records introduced Rema in 2019, who fast became a global sensation.

Read also: Yes, Omah Lay grabbed the Headies; Where do we go from here?

Jonzing World is ready to reiterate its magic but this time, in affiliation with Sony Music UK. Ruger’s debut single , “One Shirt ” features both D’Prince & Rema and the singer is already taking up positions on playlists and their covers.

The name Zinoleesky is already bumping into conversations that concern street music and we don’t envisage anything less in 2021.

The singer-producer leveraged his affinity for an automobile brand to deliver a smash.

“In My Maserati” became one of the hottest records in Nigeria in the past year.

This follows his 7-track EP dubbed Wakanda Jollof that was released in 2019.

Remix of the self-produced record features Davido and its ubiquity saw it rise to #6 on the Official Afrobeats Chart UK.

The singer teamed up with in-house producer, Rexxie to deliver “KPK”, one of 2021’s starter hits.

Mohbad closed out 2020 with an 8-track EP, Light with features from Davido, Lil Kesh, and Naira Marley.

Port Harcourt based duo launched into the mainstream with “Barawo”, a conscious record that embodies the throes of being Nigerian.

This record, though one of the hottest tracks in the country in 2020 resonates deeply with Nigerians especially during the #EndSARS protest.

The duo teamed up with Davido for a remix and then Nissi for “Symbiosis” as follow up.

Come 2021, being one of the very few duos in Nigerian music, they’re expected to explore highs armed by the expertise of Avante Concepts, an affiliation of The Plug, who boasts of a clientele that includes Davido, Mayorkun, Peruzzi, Oxlade etc.

Tsuni is gradually garnering momentum in the Nigerian music industry. She has worked with Afrobeats queen, Tiwa Savage and Alte-artiste, Wurld; she has an already impressive resume.

She has been releasing videos of herself doing covers of some of her favourite artistes. We expect the young artiste to sign a major deal in 2021.