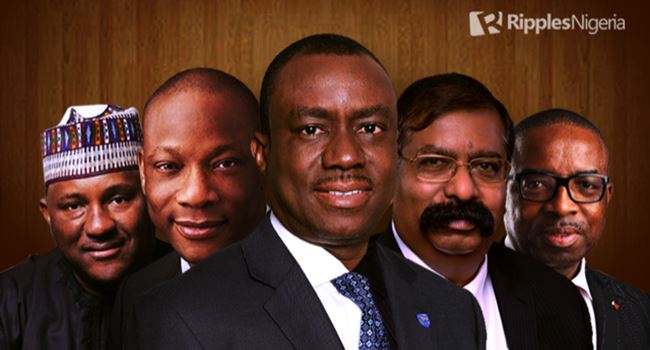 The total networth of Chief Executive Officers (CEOs) heading Nigerian-owned companies, which are the top five most capitalised firms, rose by 2.59 percent in the month of October.

The CEOs, Yusuf H. Binji, Demola Sogunle, Segun Agbaje, Ebenezer Onyeagwu and Devakumar V. G. Edwin, accounted for a total investment worth of N4.12 billion at the end of last month, against the N4.02 billion they started the month with.

However, the growth was slowed by two CEOs, Edwin and Sogunle, as the three other aforementioned heads made a combined N104.31 million gain in 31 days of the stock trading period, with Onyeagwu ending the month as the biggest gainer.

Note: The networth mentioned in this article is based on analysis of their investments in the domestic company they lead – other private investments or dividend were not factored in.

Breakdown of each CEO’s networth gain/loss

Both Edwin and Sogunle ended October with the same networth they started the month with.

At the start of October, Sogunle’s networth was N80.82 billion, and he ended the period at the same level, as Stanbic IBTC’s share value opened and closed the month at N39 per share.

Sogunle’s total investment worth is drawn from the 2.07 million direct shares held in the lender which is the fifth most capitalised domestic-owned firm at N505.32 billion.

Edwin’s investment also didn’t gain a dim in the month of October, as he closed the period at N1.68 billion, same amount he had at the opening.

His networth didn’t rise because Dangote Cement’s stock value didn’t appreciate from the N280 it started October with, closing flat at the end of the month.

Edwin owns 6 million shares in the Aliko Dangote-owned company, which is the most capitalised company in Nigeria, valued at N4.77 trillion.

Onyeagwu owns 46.5 million shares in Zenith Bank, which is the fourth most valuable Nigerian-owned company with N792.76 billion as at the end of October.

This increased Onyeagwu’s networth in the firm to N1.17 billion from N1.09 billion, as he gained from Zenith Bank’s stock appreciation.

Segun Agbaje is probably the most popular CEO in the Nigerian stock market where his company, Guaranty Trust Holding Company (GTCO), holds the position of the third most capitalised equity, valued at N843.20 billion.

He owns 32.14 million direct shares and 9.48 million indirect shares in the lender, which means Agbaje has a total of N1.19 billion in GTCO, after his shares earned him N22.89 million, to increase the N1.16 million he started October with.

Agbaje’s total stock networth rose due to the appreciation in Guaranty Trust’s share value last month, as it climbed from N28.10kobo to N28.65kobo per share.

Binji leads the second most capitalised domestic-owned firm, but his volume of shares is the lowest when compared to his counterparts in the stock market.

Binji’s gain in the stock market was tied to the rise in BUA Cement’s share price which appreciated from N66 per share of first week of October to N72 per share by month end.

Note: MTN, Airtel and Nestle were not mentioned due to their parent company’s footprint which is on foreign soil located in South Africa, India and Switzerland.