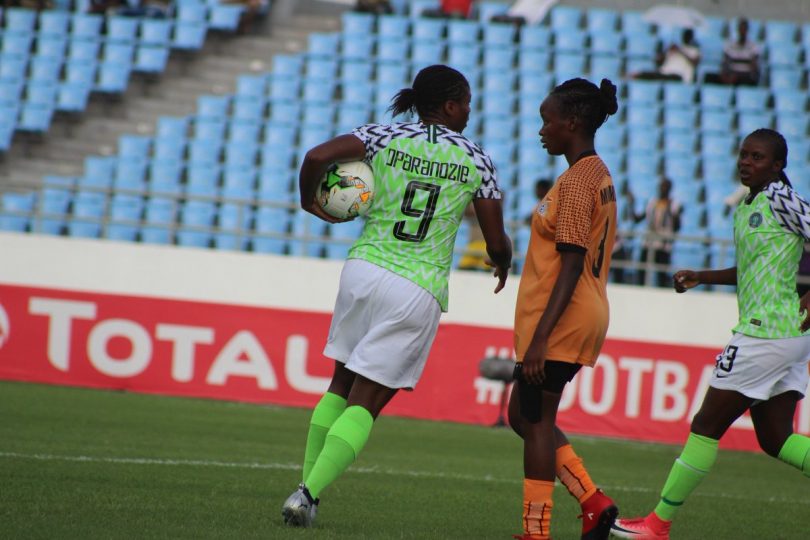 The Super Falcons of Nigeria bounced back from their defeat to South Africa with a big win over Zambia at the 2018 Africa Women’s Cup of Nations on Wednesday.

The Falcons had kickstarted their campaign with a 1-0 defeat to Banyana Banyana, but proved their worth as defending champions in their second group game by thrashing Zambia 4-0.

Desire Oparanozie opened the scoring in the 42nd minute when she fired into an open net after receiving a square pass from Francisca Ordega in the box.

Ordega doubled the lead in the 69th minute with a powerful shot after a rebound from the goalpost that stunned the Zambian goalkeeper, who had denied Nigeria severally during the first half.

The Falcons missed more chances to score in the second half, with Asisat Oshoala failing to convert her several opportunities in front of goal.

But Rasheedat Ajibade, who came in for Oparanozie, made it 3-0 when she fired in a stunning shot from outside the box in the 73rd minute, before fellow substitute Amarachi Okoronkwo sealed the victory in added time.

For Ajibade and Okoronkwo, the goals are their debut goals for the senior national women’s team.

The win restores hope for Nigeria, as they face Equatorial Guinea in their last group B match, with hope of securing a semifinal ticket in Cape Coast, Ghana.

The Thomas Dennerby side will also seal their ticket to the 2019 FIFA Women’s World Cup in France if they finish as one of the best three teams in Ghana.