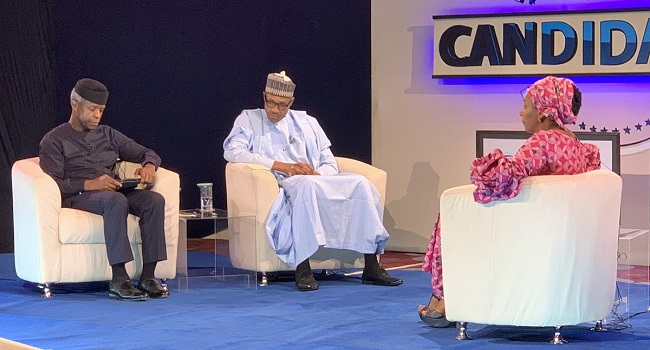 The town hall, which aired across television and radio stations, had journalist, Kadaria Ahmed as anchor.

For the most part, Osinbajo did the talking while the president mostly took notes and watched on.

At times, he was interrupted by the vice-president while trying to answer questions directed at him, as Osinbajo answered instead or elaborated, as the case may be.

Questions centred around anti-corruption, the economy, and security.

Several questions on controversial issues surrounding the administration were asked.

One such question was on Governor Ganduje of Kano State who was caught on video tape allegedly receiving bribe. Many had waited in vain for a statement from the president on the matter.

President Buhari finally made his views known on the matter after he was pressed by Ahmed.

When he tried to hijack the question, Ahmed cautioned Osinbajo, asking him to allow President Buhari express his own opinion on the authenticity of the videos depicting Governor Ganduje allegedly receiving bribes from a contractor.

“He can talk for himself,” she said to Osinbajo.

Read also: #AtikuinLagos: I won’t be Petroleum or education minister because I’m not qualified —Atiku

Buhari later responded, “As I told you, I have seen the clip. I don’t know how much technology was used but can Ganduje fail to trust someone to take it to him? Does he have to take it himself? Smiling? I honestly am overwhelmed. The system has given me some relief; it is in court. It is in the state assembly. So, let them as much as possible deal with it.

“This has received a lot of publicity and I hope by the time I visit Kano for my re-election campaign, there would be some answers from the courts and assembly in Kano State.”

President Buhari also commented on his anti-corruption method, allegations of bias, and the herdsmen crisis.

On anti-corruption, Buhari has said he is being careful not to use military methods.

While citing his first coming as a military head of state in 1984, he noted that in a democracy, strong evidence had to be provided before allegations could be prosecuted successfully in courts.

The moderator had asked Buhari to address the allegation that only members of the opposition parties were being targeted in the corruption fight.

He said, “I think that is not a fair criticism because it is not backed by facts. I don’t think that there is anybody that is being pointed out as corrupt in the last dispensation that we looked the other way.

“I think I can best illustrate this with my experience when I came in 1984. We arrested the president and the vice president, governors and ministers and put them in detention. And we said that they were guilty until they proved their innocence. We put committees of investigations based on geo-political zones and they were all investigated.

“So, I decided to come now and I have to be careful. People are not just arrested like that. But when they hold positions, if they make a wrong declaration of the number of houses they have in Europe, America and Asia and they did not mention the companies that they have floated, and the contract they gave out. If eventually uncovered, they are first in court.”

Buhari was pressed on what he was doing about allegations against members of his cabinet.

Ahmed cited the cases of a former Secretary to the Government of the Federation, Babachir Lawal, who had yet to be tried despite his dismissal for alleged corruption, and a petition by a non-governmental organisation to the Economic and Financial Crimes Commission (EFCC) against the Minister for Works, Power and Housing, Babatunde Fashola.

“I have to be careful. But if anybody, the public should help us. If there are strong allegations and people have bank accounts, names of companies looted, contracts awarded, then we take them before the courts through the EFCC and the ICPC and we have to trust the system and allow them to complete their investigations. If we just take people as we did during the military era and we locked them up, this system – multiparty democracy system – does not allow that. If you accuse anybody, you have to provide evidence in court for him to be prosecuted. If there are strong allegations, the government may decide to ask people to go, like the former secretary to the government that you mentioned,” Buhari added.

The Vice President, Yemi Osinbajo, said the case of Lawal was before the EFCC and a directive had been issued for his trial.

He noted that all cases involving members of the cabinet referred to the EFCC would receive attention.

After my tenure, I hope to enjoy life with damages from those I’ve sued for libel- Osinbajo