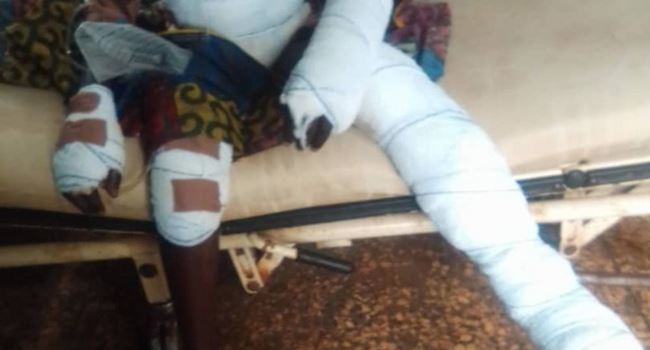 Some traders in a market in the Inikiri Benard village, Effium community, in Ohaukwu local government area of Ebonyi State, have been arrested by the police for throwing a 10-year-old boy identified simply as Ifeanyi, into a fire for allegedly stealing rice in the market.

A resident of the community, who posted the incident on social media on Tuesday, said the boy whose mother is dead and the father mentally challenged, has been the one fending for himself and his siblings.

“The boy, Ifeanyi, was thrown into a fire by two traders who accused him of stealing rice from a shop at the market to cook for himself and his siblings.”

Reacting to the incident, the chairman of Human Rights Defenders (HURIDE) in the state, Sam Nweke, condemned the inhuman act meted out to the kid and called for the prosecution of the culprits to serve as a deterrent to others.

He said: “HURIDE got a call from one George Etamesor, on the grave abuse of this poor boy. This was because he was caught trying to steal some rice in their village market. They tied him up, threw him into the fire in a refuse dump in the market, and allowed him to roast like a goat.

“The perpetrators are from the village. After committing this evil and seeing the critical condition of their victim, they still abandoned him to groan to death.

“It took the intervention of sympathisers to rush him to AMURT Hospital in Effium. But due to the severe nature of the injuries, the boy was denied treatment. Efforts were thereafter made to take him to the Alex Ekwueme Federal Teaching Hospital, Abakaliki, where he is currently struggling between life and death.

“When we inquired from the perpetrators why they went that far in maltreating the boy, they said he had the habit of stealing cassava, yam, and other things. So this time, they caught him stealing their rice and they decided to teach him a lesson so that he would not come back to steal their food again.

“They said it was not their intention to burn his whole body. They said they only tied him up and after beating him, they tried to roast his toes in the fire, but because he was struggling, he slipped off their hands and fell into the fire and got burnt beyond their expectation. We have reported the incident to the police.”

We have not received any petition on police brutality – Gombe panel