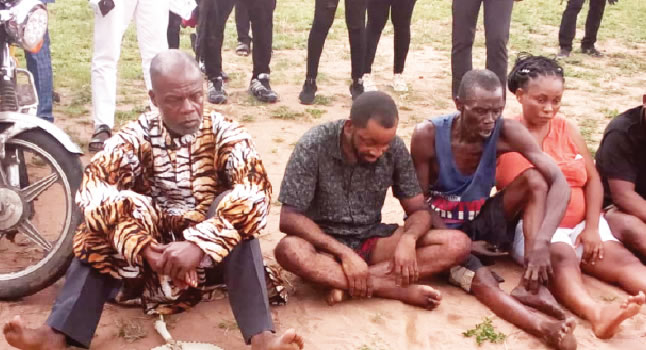 A traditional ruler in Imo State, Eze Andrew Okuegbunuwa, and one Pastor Caleb Agu have been arrested by police in Imo State for alleged kidnapping.

Eze Okuegbunuwa, who is the monarch of Obor community in Awara, Ohaji/Egbema Local Government Area, was arrested by the operatives of the Anti-Kidnapping Unit and the Special Anti-Robbery Squad of the Imo State Police Command.

The traditional ruler and the pastor were paraded alongside seven other suspects at the command’s headquarters in Owerri on Monday by the state Commissioner of Police, Isaac Akinmoyede.

Akinmoyede, during the parade, accused them of being behind the killing of two personnel of the National Drug Law Enforcement Agency (NDLEA) in the state a few months ago.

The state police chief accused the monarch of providing the gang with operational vehicle while the cleric was the leader of the syndicate.

He added that N4.2 million, which he said was part of the ransom the suspects collected from one of their victims, was recovered by police.

Also recovered from the suspects according to Akinmoyede were four AK-47 rifles, one rifle belonging to the slain NDLEA officers, 120 rounds of live ammunition, one Lexus SUV and other exhibits.

He added that the traditional ruler got N3 million from the over N7 million the gang got as ransom in one of their operations.

“On July 28, at Umuokuzu Awara in Ohaji/Egbema LGA of Imo State, SARS operatives through painstaking and diligent investigation arrested one Eze Andrew Okuegbunuwa, 59, of Obor community in Awara, Oguta LGA, Imo State, in connection with kidnapping and other armed robbery incidents.

“Investigation further revealed that the suspect provided the operational vehicle, Lexus RX 330 with number plate, URM 404 EL, for the kidnappers.

“Having lost the vehicle in an operation, the monarch was given the sum of N3m to replace his vehicle by the kidnappers. It was further disclosed that the vehicle was not registered, as there is no record of it in the Federal Road Safety Corps database,” Akinmoyede said.

The monarch told newsmen that he not only got N3 million from the gang but had been receiving money from them each time they returned from an operation.