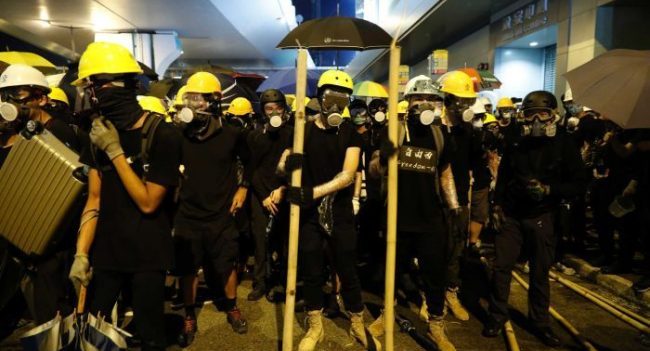 Authorities in the semi-autonomous city of Hong Kong have suspended trains and airport trips as protesters continue to pile up pressure after a night of heavy clashes with police.

“There was no violence. Police did not use batons or tear gas. They simply charged towards the protesters, who dispersed in different directions as a result,” Al Jazeera’s Sarah Clarke, reporting from the airport, said.

“Nevertheless, the protesters achieved what they wanted at this stage, which is a transport chaos.”

The development comes after police authorities in Hong Kong arrested three leading pro-democracy activists hours before a major protests in the semi-autonomous city.

Reports say Demosisto Party leaders Joshua Wong and Agnes Chow were arrested on Friday, just hours after independence activist Andy Chan was arrested at the city’s airport, in the run-up to a major demonstration scheduled for Saturday.

According to a report on social media by Demosisto Party, Wong, the organisation’s secretary-general, and Chow, a senior member, were arrested separately and taken to the Wan Chai police headquarters.

The protest movement was triggered in June by a proposed bill that would have allowed extraditions of suspects to mainland China.