TRENDING: Give to my church ‘otherwise you and Atiku will fail’, Mbaka tells Obi (Video) | Ripples Nigeria 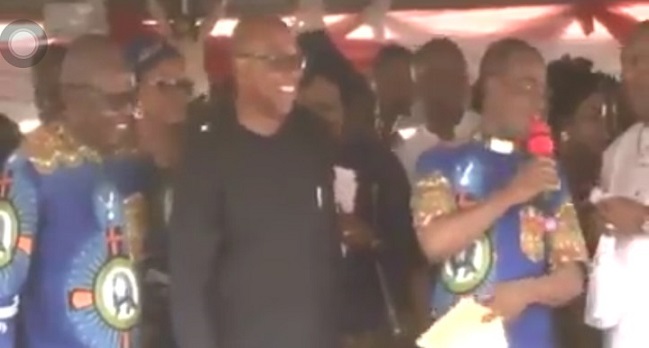 Mbaka said Atiku and Obi might “end in shame” with the way they are going.

The Catholic priest said this after Obi failed to announce donations at the ministry’s 2018 harvest and bazaar celebration.

Obi attended the programme which held during the weekend alongside other politicians from the South-East.

Standing side by side on stage, Mbaka asked him to “stay in front of this children of God and tell God what you will do for Him … or what that means is, you don’t want to do anything for God. This is common deceit.”

Obi replied, “Father, what I said is straightforward. You will come and show me the project so that the two of us will talk. That is what I said.”

Mbaka then accused the former governor of Anambra of making “political statement”, to which he responded, “Father knows I don’t make political statements. Anyone here from Anambra state knows Peter Obi has never promised anything and failed. I am a fundamental Catholic. I do whatever I say at the church.”

The priest said in response, “In your capacity and what God has done for you as governor … God hates stinginess. What I am saying is not to please you, but what will save your life. Otherwise you and Atiku will fail.

“If there is a place they will coat words for you, it is not at Mbaka’s altar. You can save your political destiny. Or in 2019, you people will not even know how they did the election. What will make my brother to come for bazaar and he won’t even break kola?”

Mbaka went on to tell Obi how governors of Ebonyi and Enugu made donations without announcing at the altar and urged him to do same.

“Your own is taking time,” he said, adding: “The way you and Atiku are moving will end in shame”.

“Let us continue our bazaar. You know since he is not supporting us, the ministry has been moving. If people start arguing like this, their downfall begins,” he said.

The priest also said he would make prediction regarding the 2019 presidential election come December 31.

A video of the scene as published by Onye Njenje on YouTube id below: