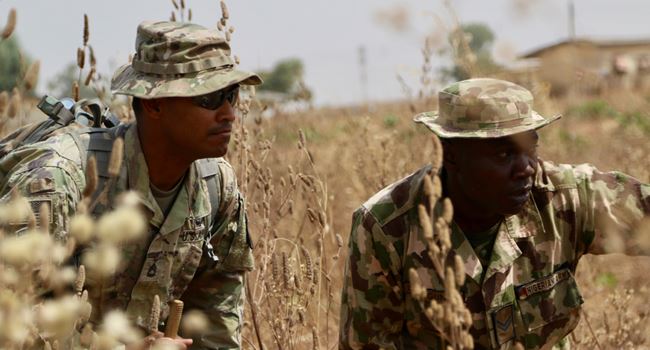 This was contained in a statement issued on Saturday by Brig-Gen. Bernard Onyeuko who said that no fewer than six terrorists were killed from bullets fired by the troops, leaving dozens lifeless and many others fleeing in different directions with bullet wounds.

According to Brig-Gen. Onyeuko, the operation which witnessed the confiscation of four AK-47 rifles, ammunition and gun trucks was carried out following intelligence on terrorist activities within Shyadawe/Nagasino axis.

He said; “The unrelenting troops engaged them with rapid gunfire, cutting them in disarray as the terrorists withdrew in all directions and confusion while several of them fled with gunshot wounds.

“Also troops of 202 Battalion at the strong response area of Borno College of Basic Studies (BOCOBS) sprang an ambush against the terrorists at Ngurosoye deserted village.”

“The terrorists attempted to infiltrate the fortified military camp before engaging them. But the troops, who were on high alert, engaged the criminals with a heavy volume of fire, before fleeing with gunshot wounds.

“Our soldiers dealt a devastating blow on terrorists forcing them to flee towards the Gubio/Damasak axis,” he said.

He added that at Burari on the fringes of Sambisa Forest, three terrorists were also killed, while others fled with sustained injuries.

“There were traces of blood of dragged casualties by terrorists during our exploitation,” he said, urging that the troops not rest on their oars of successful military operations,” the General concluded.