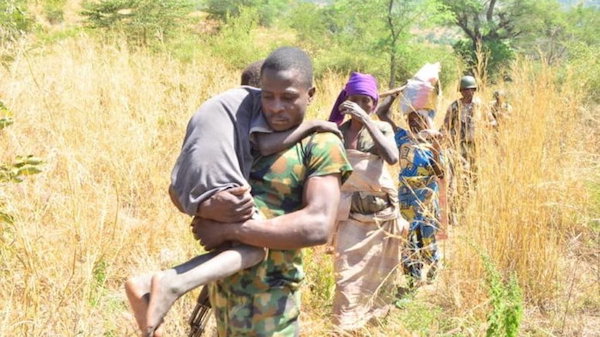 The Nigerian Army said Saturday its troops rescued five captives including a septuagenarian, three women and a minor from Boko Haram fighters in the last few days.

The Nigerian Army Operations Media Coordinator, Col. Aminu Iliyasu, disclosed this in a statement in Abuja.

The statement said troops of 121 Battalion deployed at Pulka in Gwoza local government area of the state destroyed the terrorists’ hideout at Zeledva Hills along Pulka – Bokko – Ngoshe Road on Wednesday.

It read: “More elements of the Boko Haram/Islamic State of West African Province (ISWAP) terror group, bandits and other criminal elements have either been neutralised or arrested at their hideouts across the country and more of their abductees have been freed.

“On January 7 for instance, troops of 121 Battalion deployed at Pulka in Gwoza LGA of Borno State while on ‘Operation RUFE KOFA’ cleared and destroyed Boko Haram criminals’ hideouts at Zeledva Hills along Pulka – Bokko – Ngoshe Road in the same LGA.”

READ ALSO: Presidency says Buhari’s daughter has every right to use Presidential Jet for private function

The statement added: “On sighting the troops, the criminals fled the enclave in disarray, while the resilient troops went ahead to clear the hideout of any presence and activities of the insurgents.

“In the process, the troops rescued five abandoned captives including one septuagenarian, three women and one minor.”