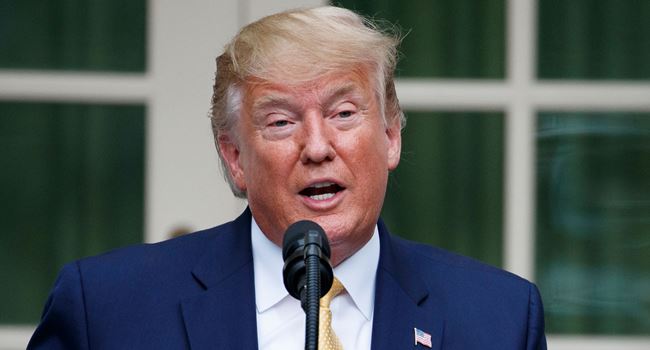 President Donald Trump of the United States has accused Twitter of trying to stifle free speech and meddling in US election matter.

Trump made the accusations after the social media company gave his tweet a fact-check label on Tuesday.

Twitter fact-checked Trump’s tweet where he said: “There is NO WAY (ZERO!) that Mail-In Ballots will be anything less than substantially fraudulent.”

Twitter placed a warning label on the tweet and a subsequent one shortly after it was sent out.

The social media fact-check notification displayed a blue exclamation mark underneath the tweets, suggesting readers “get the facts about mail-in ballots”.

The fact-check link directed users to a page on which Mr Trump’s claims about mail-in ballots are described as “unsubstantiated”. Twitter also cited reports on the issue by CNN, the Washington Post and others.

However, in new tweets, President Trump accused Twitter of interfering in the US presidential election scheduled for 3 November 2020 and “completely stifling free speech”, which he said he will never allow it happen.

Also responding to the fact-checking of the President’s tweet, Trump’s Presidential Campaign Manager, Brad Parscale, wrote: “Partnering with biased fake news ‘fact checkers’ is a smoke screen to lend Twitter’s obvious political tactics false credibility. There are many reasons we pulled all our advertising from Twitter months ago, and clear political bias is one of them.”