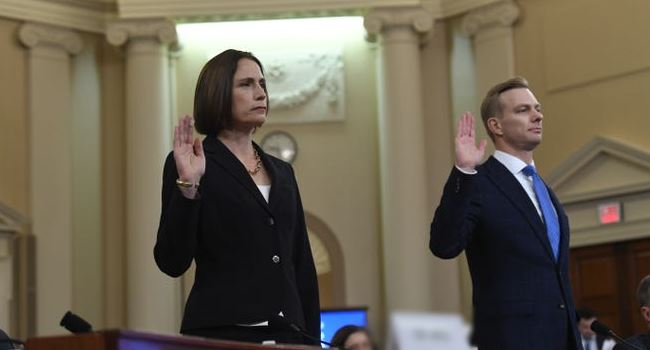 Two key witnesses identified as Fiona Hill, the former senior director for Russia and Europe at the White House National Security Council, and David Holmes, the top political counsellor at the US embassy in Kyiv, testified against President Donald Trump on Thursday in the ongoing impeachment inquiry.

The pair testified against Trump in the last of this week’s scheduled hearings in the ongoing impeachment inquiry against the US president for abusing the power of the presidency.

They both told the United States House of Representatives that a number of officials openly pushed Ukraine for partisan investigations with the knowledge and backing of Trump.

“The president did, in fact, have knowledge that those senior officials were using the levers of our diplomatic power to induce the new Ukrainian president to announce the opening of a criminal investigation against Trump’s political opponent,” Holmes told the impeachment inquiry.

The development comes after the House of Representatives Speaker, Nancy Pelosi, dismissed the President’s denials of wrongdoing.

Pelosi accused Trump of an impeachable offence under the US Constitution and said he (Trump) has already admitted to bribery in the Ukraine scandal at the heart of a Democratic-led inquiry,

“The bribe is to grant or withhold military assistance in return for a public statement of a fake investigation into the elections. That’s bribery,” Pelosi, the top Democrat in Congress, told a news conference on Thursday, the day after the first public hearing in the impeachment inquiry she announced in September.

Related Topics:BidenRussiatrumpunited states
Up Next