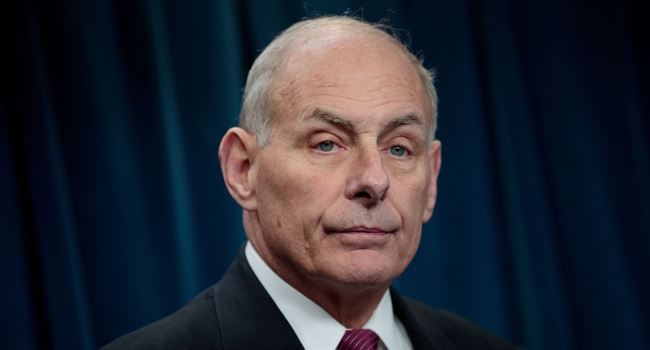 The former Chief of Staff to President Donald Trump, John Kelly, has bemoaned the stance of the incumbent President not to concede defeat to Democratic Party candidate, Joe Biden, in the November 3, presidential election in the United States, as being inimical to national security.

Kelly made the statement during an interview he had with the Politico, saying that by now, Biden should be receiving intelligence briefings because the “transition, in the national security realm in particular, and the homeland security realm, is just so important that every day that the transition is delayed, brings handicap and impediment to the incoming administration.”

The former CoS added that Trump’s refusal to concede defeat and delaying in transitioning to a Biden presidency is hurting the U.S. national security.

Trump has still not conceded defeat to Biden as he insists that the election was flawed with irregularities as well as massive fraud, a claim the electoral body has continuously denied.

General Services Administration Administrator, Emily Murphy, a Trump political appointee, has also refused to sign vital documents declaring Biden the winner of the election and until those documents are signed, Biden won’t be able to get all the logistical and financial help his transition team needs to get to work.

“You lose a lot if the transition is delayed because the new people are not allowed to get their head in the game. It’s not a process where you go from zero to 1,000 miles per hour,” Kelly, who has consistently criticized Trump since he was fired in January 2019, said in the interview.

“The President, with all due respect, does not have to concede. But it’s about the nation. It hurts our national security because the people should be getting up to speed.

“I know Mr. Trump better than most people do. I know that he’ll never accept defeat and, in fact, he doesn’t have to accept defeat here. He just has to do what’s best for the country and in the country’s interest.
“The delay in transitioning is an increasing national security and health crisis. The current administration does not have to concede, but it should do the right thing just in case the Constitutional system declares they lost.

“Biden has not been getting a daily security briefing despite emerging as the President-elect over a week ago,” Kelly added.

A group of more than 150 former National Security officials have also urged the General Service Administration, GSA, to officially recognise the Democratic candidate as the winner of the presidential election without further delay.

The group told the BBC that this will enable the Biden team access “pressing national security issues.”

A growing number of Republican senators, including members of GOP leadership, said that Biden should get the intelligence briefings Trump is currently denying him.

“It is not about the GOP or the Democrat Party. It is not about the president or about Mr. Biden. It is about America and what is best for our people. Mr. Trump should order the transition process to begin immediately. It is the right and moral thing to do,” the Senators noted.

I have also been a victim of police brutality –Wizkid