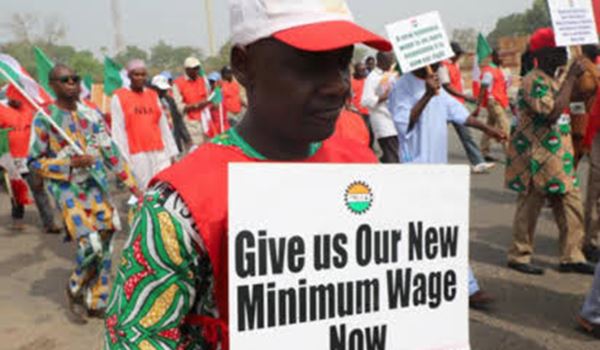 The Trade Union Congress (TUC) said on Wednesday it would embark on a nationwide strike if the Nigerian government fails to implement the new N30,000 minimum wage at the end of their final meeting slated for October 16.

The Chairman of TUC, Enugu State chapter, Mr. Igbokwe C. Igbokwe, who disclosed this, said the directive has been issued to several organs of the union, including Enugu State.

He said: “We are preparing. We just got a letter from the national leadership of our union to start mobilising, that is if at the close of work on October 16 and the government did not meet up with the labour’s demand, we shall call workers out for strike.

“If these things are not done by the close of work on October 16, then we wait for further directive from our leadership on what to do. I can assure you now that every state has commenced mobilisation.  Workers are angry and tired.  You cannot be probating and reprobating.

“You cannot come out and say I’ll pay and tomorrow you come out and say I’ll not pay.  You cannot be talking with both sides of the mouth because it is embarrassing, and workers are getting tired because a promise has been made and we have waited and waited and nothing has happened and it is beginning to look as if they are doing a macabre dance and we don’t understand it.

“I am telling you that workers are angry because of their minimum wage and they are ready at any moment to down tools.  All we are waiting for is instruction or a directive from our national leadership.”

The Minister for Labour and Employment, Dr. Chris Ngige, had said on Wednesday that the government had scheduled a high-level meeting with labour unions to negotiate the full implementation of the new minimum wage by October 15.

According to a statement, signed by Charles Akpan, the ministry’s Deputy Director for Press and Public Relations, the meeting will resolve issues surrounding the consequential adjustment of the new national minimum wage and pave way for its implementation.