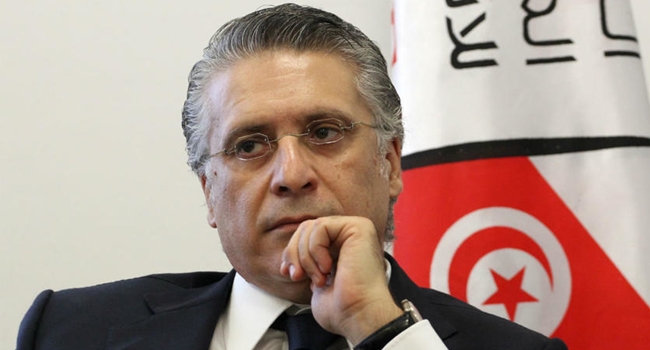 Tunisia’s Electoral Commission has declared that arrested media mogul, Nabil Karoui remains in the race for next month’s presidential election despite his arrest.

According to an electoral official, Karoui who was arrested on charges of money laundering and tax evasion remains in contention as long as there is no change in his legal status.

“As long as there are no changes in his legal status and no final verdict, Nabil Karoui remains a presidential candidate,” Nabil Baffoun, the head of the electoral commission, told reporters on Saturday.

In a related development, Karoui’s political party has blamed the arrest of the media mogul on his main rival in the person of Prime Minister Youssef Chahed.

Karoui’s party alleged that Chahed was behind the arrest but said it would only serve to promote the campaign of the arrested businessman turned politician.

“We are making a direct accusation against Youssef Chahed and his gang of having orchestrated this arrest,” a Qalb Tounes senior official, Iyadh Elloumi, told a news conference.

He said such “degrading and dictatorial practises” would only serve as “free publicity” for Karoui.

The politician who is the founder of a major private television channel in Tunisia and is one of the main challengers contesting the September 15 election following the death of President Beji Caid Essebsi last month, was arrested alongside his brother.

Private radio station Mosaique FM quoted a judicial official confirming that an arrest warrant had been issued against Karoui and his brother Ghazi for money laundering.

Recall that Karoui was earlier charged with money laundering in early July shortly after stating his intention to stand in the polls, but has remained a leading candidate despite the charges against him.