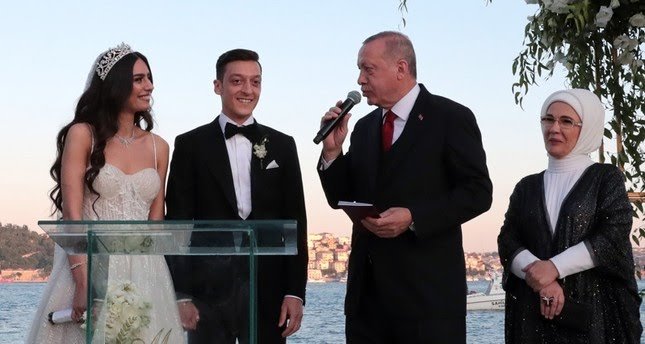 Turkish President Recep Tayyip Erdogan functioned in the capacity of a Witness (like a best man) at Arsenal footballer Mesut Ozil’s wedding on Friday.

Ozil, who has Turkish roots, played for the German national team 92 times, was voted player of the year five times, and won the 2014 World Cup with the team.

The 30-year-old midfielder sparked sparked a controversy after he posed in photos with Erdogan prior to the 2018 World Cup.

He would later quit international football, citing the “racism and disrespect” he had experienced over the photos in Germany.

Ozil married his fiancee, former Miss Turkey Amine Gulse, at a luxury hotel on the banks of the Bosphorus.

And having earlier announced in March this year that he’d asked Mr Erdogan to be his best man, Ozil was given the honour by the Turkish president.

Meanwhile, Ozil and his wife Amine Gulse marked their wedding with a gesture to help children around the world.

They are paying for 1,000 children to have life-changing surgery, and so, chose to forego receiving traditional gifts and asked guests to donate to the charity.

The charity funds operations for children in developing countries who suffer from burns, club feet and cleft lip and palate.

“As a professional footballer I am in a fortunate and privileged position. However, I invite everyone who is willing and able to help to support a very special project close to both of our hearts.

“Amine and I will bear the expenses for surgeries of 1,000 children in need,” Ozil wrote on social media before the wedding.