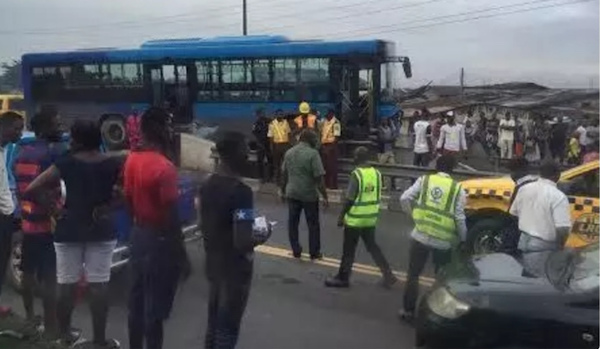 Two persons died on Wednesday in an auto crash involving a vehicle in the Bus Rapid Transit (BRT) scheme and commercial motorcycle in the Abule Egba area of Lagos.

Meanwhile, Primero Transport Services Limited, operator of the BRT, had expressed regret over the accident.

In a statement issued by its Head of Corporate Communications, Mr. Mutiu Yekeen, the firm commiserated with the family of the victims.

He said: “At about 4:00 a.m., a bus heading to Abule-Egba from Oshodi, was involved in an accident that claimed the lives of two persons on the spot.

READ ALSO: One feared dead, many injured as BRT collides with Dangote trailer in Lagos

“A commercial motorcyclist, according to the Busman, appeared from nowhere on the BRT corridor.

“The driver, who could not avoid the motorcycle which had no headlamp and was facing the oncoming bus, knocked down the victims.”

According to him, the driver of the BRT bus quickly ran to Oke-Odo police station to report the matter.

He said when the Lagos State Emergency Management Agency (LASEMA) team arrived at the scene of the accident, two victims who died on the spot and were taken away by the team.

Yekeen said the third person was taken to hospital by the LASEMA team.