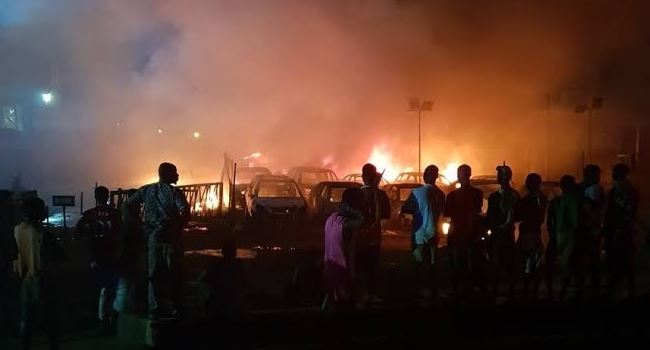 Many people were injured, as fire from the explosions also razed houses and vehicles.

The fire, which started around Ile-Epo bus stop at about 8pm, was said to have spread to Abule-Egba, Fagba and Ekoro roads.

In a swift reaction, Lagos State Commissioner for Information and Strategy Mr Gbenga Omotoso said: “A pipeline fire has been reported at Abule-Egba.

“The Lagos State Emergency Management Agency (LASEMA) and other security/emergency agencies have activated their machinery to fight the fire.”

LASEMA response teams and other first responders were mobilised to the site and residents were seen fleeing their homes as the fire lit up the night sky.

Those living afar said they kept vigil and were ready to flee should the fire extend to their areas.

It was learnt that the Nigerian National Petroleum Corporation (NNPC) in Ogun State shut down the line to reduce the intensity of the fire.

The cause of the fire could not be immediately confirmed, but residents suspect pipeline vandalism.