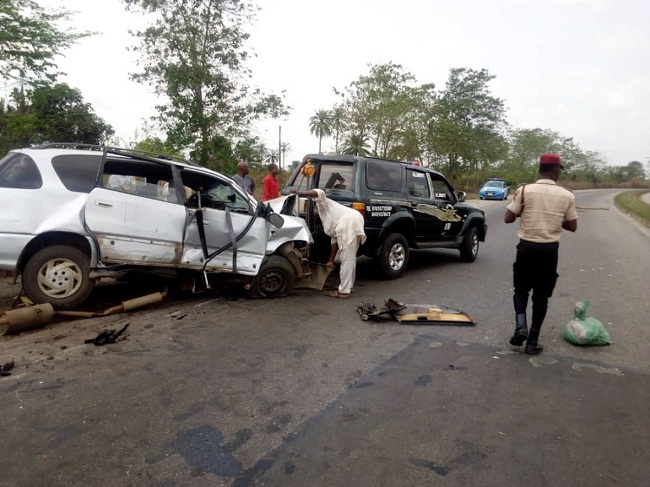 Multiple accidents that occurred at the Gbuguda/ Ewekoro area of Ogun State on Saturday, have left two persons including a minor reportedly dead, and seven others injured.

According to reports, the driver of the Toyota Sienna was on top speed and lost control while trying to avoid a pothole, ramming into the Ford and tricycle, which were waiting to pick passengers by the roadside.

As a result of the accident, two commuters waiting to board vehicles to various destinations were killed while seven others were injured.

Those who died were a minor (whose mother survived the incident) and an elderly man.

It was gathered that the driver of the Toyota Sienna, who survived the accident was arrested and taken to Itori Divisional Police Station, with other accident vehicles involved in the multiple crashes.

Also, those injured were said to have been taken to the General Hospital, Ifo, while those killed were deposited at a morgue.

Meanwhile, the Spokesperson of the Ogun State Traffic Compliance and Emergency Corps (TRACE), Babatunde Akinbiyi, has confirmed the incident.

He said, “TRACE is again admonishing drivers to please regulate their speed and avoid speeding, while traders are urged to stop displaying their wares on the road and commuters should always stand at designated bus stops to board vehicles to their destinations.”.