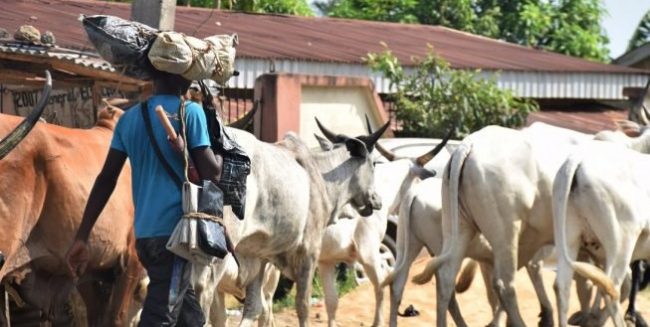 Two governors of the Peoples Democratic Party (PDP) from the South East are said to have concluded plans to hand over lands in some senatorial zones in their states to herdsmen.

The Indigenous People of Biafra (IPOB) made the allegation in a statement on Sunday by its national publicity secretary, Emma Powerful.

The group, which did not reveal the identities of the governors, however said not minding the treacherous activities of some governors in the region, that IPOB will not abandon its “critical task of confronting terrorists in our forests and bushes in order to frustrate the deceptive governors.”

According to IPOB, the plots by the governors were part of the now suspended Ruga programme, which was heavily kicked against by many southern and some middle-belt governors.

“it has come to the knowledge of the great family of the Indigenous People of Biafra, IPOB, that two PDP governors in the South-East have concluded arrangements to hand over our land in three senatorial zones to terror herdsmen as part of their clandestine RUGA implementation programme in the East.

“We have also discovered that one of the governors, along with some traditional rulers and president-general of some communities, also connived and handed over a land belonging to communities of his state to terrorists and their cattle.

“The said land has been in dispute for years between the two communities, but now the governor has forcefully taken these ancestral lands and handed them over to the same terror herdsmen responsible for hacking to death of dozens of indigenes in many parts of the state without any reprimand.

“The message South-East governors are sending out is that terrorists are welcomed to kill Biafrans at will and get rewarded with land for their settlement.

“Instead of apprehending and prosecuting these marauding murderers, the governor has instead, empowered them by giving them a Ruga settlement in his state, while publicly claiming he has not done so.

“This level of deception from South-East governors have placed the entire Biafraland in danger of wholesale herdsmen invasion. We, IPOB, cannot be dying and placing our lives in danger on a daily basis across Biafraland, fighting well-armed terrorists with our bare hands, only to have deceptive governors undermining our noble effort.

“Anybody related to these governors or other slaves in government houses in the East must warn them to desist from their suicidal undertaking to hand over our land to the Islamic caliphate.

“We are equally aware that other state governors and politicians in Biafraland are having series of secret meetings on how to allocate our sacred land of Biafra to terrorists for their Ruga settlement on the pretence of a renamed National Livestock Programme (NLP) of the deceptive Federal Government. We are calling on all relatives, stakeholders, supporters of South East governors and traditional rulers to warn these governors including those in other states, to desist from this evil act of ceding our ancestral lands to terrorists for Ruga settlement or National Livestock Programme in any part of Biafraland.

“We will not spare any person or persons implicated in the conspiracy to Islamise Biafraland through forced settlements,” IPOB statement read.

Meanwhile the claim by IPOB may have been refuted by the Archbishop of Enugu Ecclesiastical Province (Anglican Communion) Most Rev. Emmanuel Chukwuma.

Chukwuma, during his sermon at the 85th birthday/thanksgiving service for Dame Beatrice Ekwueme, wife of the late former Vice President of Nigeria, Dr. Alex Ekwueme, described news on social media that some governors of the South East have secretly allocated lands to herders for RUGA settlement as fake.

At the event with Governor Ifeanyi Ugwuanyi of Enugu State, former governors Jim Nwobodo, Okwesilieze Nwodo, Sam Egwu, Peter Obi and Virgy Etiaba, among other in attendance, the cleric said, “Let me clear this; no governor in the South-East has agreed that there will be any land for RUGA settlement.”