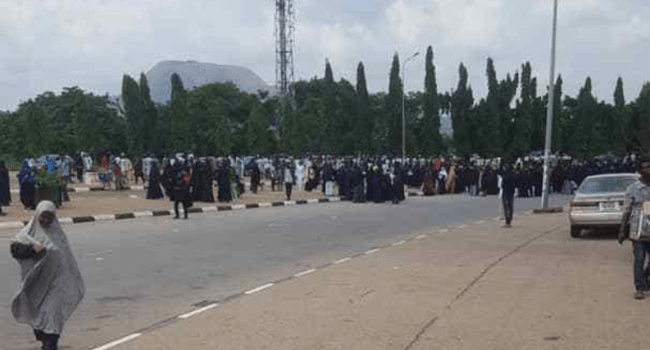 A protest at the National Assembly, Abuja by members of Islamic Movement in Nigeria (IMN) also known as Shiites, on Tuesday turned bloody, leading to the death of some police officers.

No less than three policemen on duty were reportedly shot as a result of the incident which caused chaos within the assembly complex.

The protesters were said to have resorted to violent protest and shooting of guns after the security operatives refused to allow them force their way into the assembly complex.

The development made police to lock the entrance of the National Assembly, which seemingly infuriated the protesters.

Shi’ites members have been protesting over the continued detention of their leader, Ibrahim El-Zakzaky, since December 2015 by the Department of State Security (DSS).

Despite a court ruling ordering for the release of the cleric, who is facing charges for culpable homicide, unlawful assembly, and disruption of public peace, and his wife, President Muhammadu Buhari led Federal Government, has refused to free him.

Earlier last Thursday, the Islamic group had also taken their protest to the National Assembly and was addressed by the House of Representatives Leader, Alhassan Ado Doguwa.

Doguwa, who spoke to them at the gate of the National Assembly, had promised them then that their message would be delivered to the appropriate quarters.