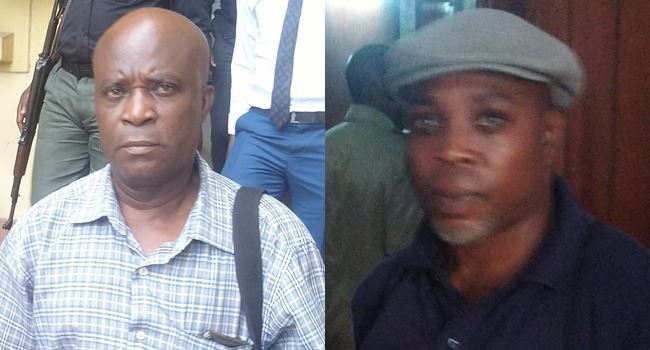 Two scammers, one David Obi and Sunday Onuigwe were on Monday sentenced to seven years imprisonment each.

Justice Olabisi Akinlade of the State High Court sitting in Ikeja, Lagos handed the jail terms to them for obtaining N22.5 million by false pretence.

The duo were arraigned before the court by the Economic and Financial Crimes Commission, (EFCC), Lagos zonal office.

They were convicted after they were found guilty of the five-count charge preferred against them by the anti-graft agency.

They however pleaded not guilty to the charges.

One of the charges read: “That you David Obi, Sunday Onuigwe and Anthony Woke (now at large) on or about the 21th July, 2011 at Lagos within the Ikeja Judicial Division with intent to defraud did obtain the sum of N6,900,000.00 (Six Million, Nine Hundred Thousand Naira) from Chris Ubosi, the Managing Director of Megalectrics Limited by falsely representing that you had a property at Old GRA Port Harcourt, Rivers States to sell and the said sum represented part payment of the purchase price of N30,000,000 (Thirty Million Naira) which representation you knew to be false.”

At the sitting on Monday, the prosecution counsel, Usman Umar Buhari urged the court to convict and sentence the defendants as charged so as to serve as a deterrent to the members of the public.

Justice Akinlade, while delivering judgement on the case, said the prosecution has proved its case beyond reasonable doubt coupled with diligent and thorough prosecutorial skills in accordance with the law.

Justice Akinlade convicted and sentenced the defendants to seven years each as prayed by the prosecution.

She also ordered that the N1 million, in the custody of the Inspector General of Police (IGP), which was recovered from the second defendant, Sunday Onuigwe during investigation be given to the victim of the offence.

They convicts were sentenced without an option of fine.

Related Topics:EFCCTwo scammers
Up Next

Nigerian scientists should lead the fight against Covid-19, not politicians —ASUU