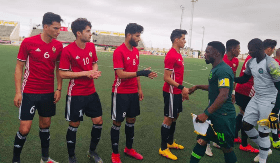 Nigeria’s under-23 national men’s football team fell to a shocking defeat to Libya in an Africa Cup of Nations qualifier on Wednesday.

Nigeria now face a high mountain to climb in the second leg of the tie after they were inflicted with a 2-0 defeat at the Stade de Ben Guerdane.

The Imama Amapakabo team had the likes of Arsenal’s Kelechi Nwakali, Liverpool’s Taiwo Awoniyi, Villareal’s Samuel Chukwueze in the game.

Libya took the lead after just seven minutes when striker, Zakaria Alharaish scored to put his team ahead.

Things got worse for Nigeria after goalkeeper, Adamu Abubakar was sent off just before the break for handling outside the area as the defence showed some nervy and uninspiring displays in closing down their pacy opponents.

While Dennis Bonaventure made way in a tactical change after the setback, Orewale Oremade was brought on to mend the goalpost.

The Libyans then finished off another quick counter attack to place Nigeria under pressure in their pursuit for a spot in the Nations Cup.

The second leg of the tie will take place at the Stephen Keshi International stadium in Asaba on March 25th.