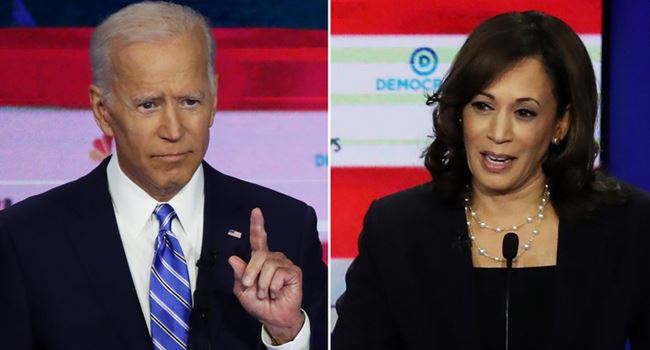 A day after United States Senator, Kamala Harris, ended her 2020 presidential bid, former Vice President Joe Biden, a leading contender for the Democratic nomination, said early on Thursday he would consider her as a potential running mate.

Biden, with whom Harris clashed during a Democratic debate earlier this year, praised her after a campaign event in Ames, Iowa.

“Senator Harris has the capacity to be anything she wants to be,” Biden told journalists, according to a video posted by CBS News.

Reuters reports that Biden and Harris had a contentious exchange over forced busing in public schools in the first Democratic debate in Miami in June. It was a standout moment for Harris, who saw her fortunes briefly rise in her party’s contest for the right to challenge Republican President Donald Trump in next year’s election.

But any rift appears to have been closed. Biden praised Harris effusively after she dropped out. Harris was close friends with Biden’s son Beau, before he died of brain cancer in 2015.

Biden said: “Of course I would” consider Harris to be a running mate.

Earlier this year, Harris, 55, was viewed as a prime contender in the crowded Democratic presidential field. But organizational and financial woes, along with her struggles to make a compelling case for her candidacy, derailed her campaign.