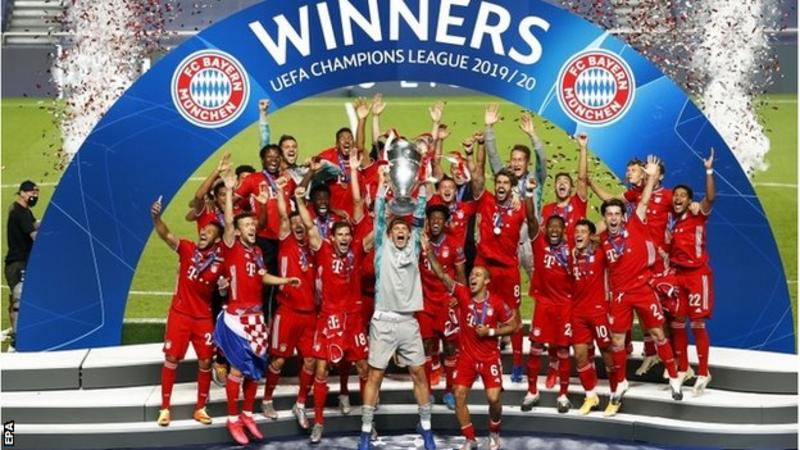 German giants, Bayern Munich kicked off their Champions League title defence with a 4-0 victory over Atletico Madrid on Wednesday night.

Bayern, who defeated Paris Saint-Germain in last season’s final, began the new campaign with a stunning win over the Spanish side.

Winger Kingsley Coman bagged a brace while while midfielders Leon Goretzka and Corentin Tolisso also found the back of the net.

The Hansi Flick extended their record run to 12 straight wins in the competition after making light of the Diego Simeone team.

In the other game of group A between RB Salzburg and Lokomotiv Moscow ended in 2-2 draw.

Elsewhere, former champions Real Madrid were stunned 3-2 by Shakhtar Donetsk in group B.

The 13-time European Cup winners were handed a humiliating defeat by a second-string Shakhtar side, who were without 13 first-team players with Covid-19.

Shakhtar bagged three goals in the first half to stay in command before goals from Luka Modric and Vinicius Junior after the break gave Real hope, but the visitors held on to win.

In the other game of the group, Inter Milan played a 2-2 draw with Borussia Monchengladbach.

Premier League side, Manchester City kicked off their campaign with a 3-1 comeback victory over Portuguese side, Porto.

The other game in group C saw Olympiakos defeat Marseille 1-0.

In group D, Liverpool secured a win over Ajax thanks to an own goal from Nicolas Tagliafico. Atalanta then thrashed Midtjylland 4-0.