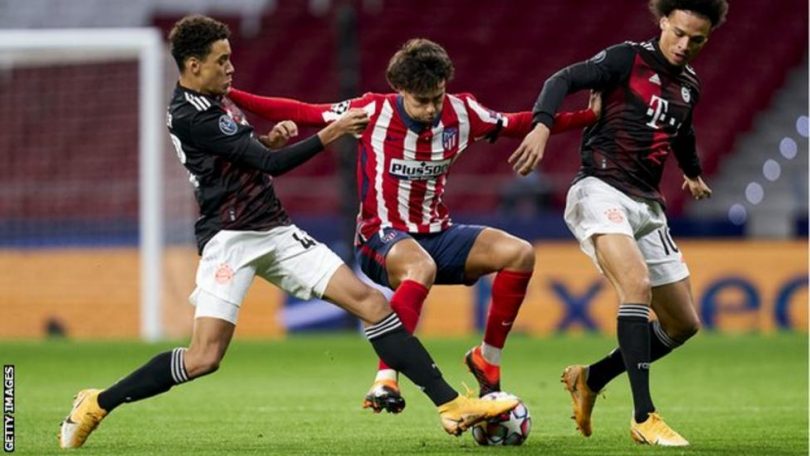 Defending champions Bayern Munich failed to clinch a win for the first time in 15 matches in the UEFA Champions League following a 1-1 draw with Atletico Madrid on Tuesday.

Bayern, who won the title last season without losing or drawing a game, continued in the run this season until the matchday five encounter played in Spain.

Th Bundesliga champions are already qualified for the knockout stages, and the drop in points only means something for their opponents.

With the result, Atletico must avoid defeat in their final group game at Red Bull Salzburg to ensure qualification for the round of 16.

Atletico were heading for the knockout rounds after Joao Felix’s opening goal, before substitute Thomas Muller earned Bayern a draw with a late penalty.

The other game of group A between Locomotiv Moscow and RB Salzburg ended 3-1 in the latter’s favour, placing them on third spot with four points, to contend with Atletico for a place in the next round.

In Ukraine, second half goals from Dentinho and Manor Solomon secured a 2-0 win for Shakhtar Donetsk over Real Madrid.

Real are facing an early exit after the shock Group B defeat, as they currently sit third with seven points, level with Shakhtar.

In the other game of the group, Inter Milan played a five-goal thriller with Monchengladbach and won 3-2 to keep hopes alive of advancing.

In Portugal, Porto were held to a goalless draw by Manchester City, although both teams had already qualified for the knockout stages.

In the other group C tie, Marseille defeated Olympiakos 2-1 to keep hopes alive of finishing third in the group.

In group D, Liverpool beat Ajax 1-0 at Anfield to advance to knockout stages, while Atalanta were held to a 1-1 draw by Midtjylland.