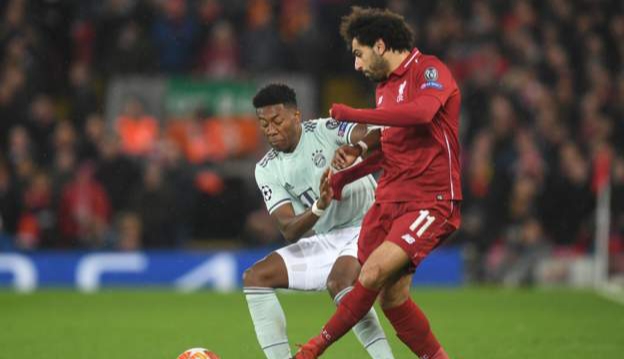 Liverpool were held to a goalless draw by Bayern Munich in their Champions League last 16 first leg at Anfield on Tuesday night.

The Premier League side, who made about 14 attempts at goal, were kept out frustrated even as they tried to create but nothing was working.

The Bundesliga champions must be slight favourites of the tie now, as they have lost only two of their last 26 home Champions League games, winning 22 and drawing two of those.

The second leg at the Allianz Arena is on Wednesday, March 13.

Bayern striker Robert Lewandowski said after the game: “It was a tough game. Maybe we could have scored a goal.

“Liverpool are a very dangerous team. We had to play compact for the 90 minutes.”

Elsewhere, Olympique Lyon also played goalless with Barcelona, as both teams will wait until the second leg to decide their fate.

Wasteful Barcelona could not convert any of their 25 shots, as Lionel Messi, Luis Suarez and Phillipe Coutinho were all denied by Lyon goalkeeper Anthony Lopes.

The return leg takes place at the Nou Camp on Wednesday, March 13.

Joshua insists future fight with Fury or Wilder can happen