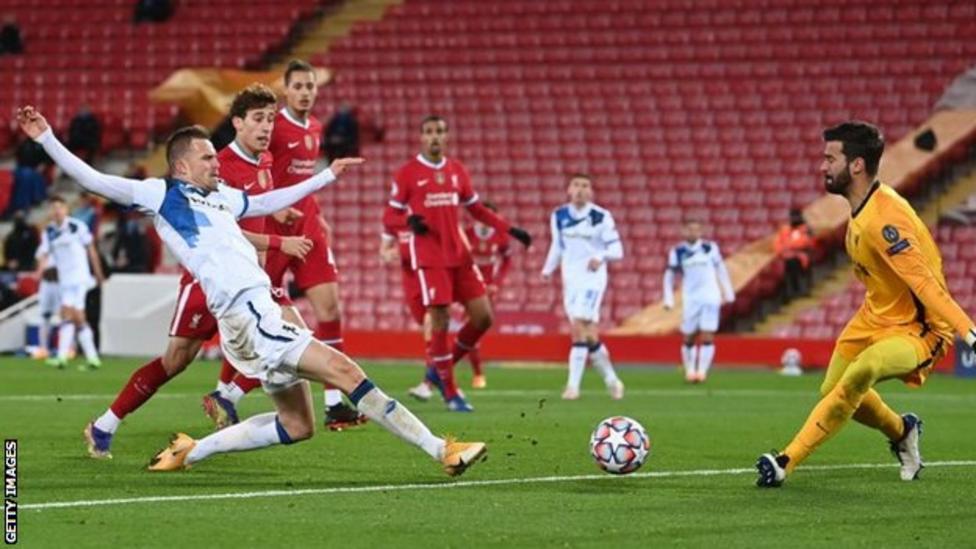 English Premier League champions, Liverpool suffered a shock 2-0 defeat at home to Atalanta in the Champions League on Wednesday.

Josip Ilicic and Robin Gosens struck for the Serie A side to seal a surprise victory.

The Reds could have sealed an early qualification for the round of 16 with a win, but conceding two goals in four second-half minutes forced a delay.

Jurgen Klopp’s men still remain top of the group D and need one win from their final two games to qualify.

The other game of rhe group between Ajax and Midtjylland ended 3-1 in favour of Dutch side Ajax, who are now sitting second behind Liverpool, on same points however with Atalanta.

Earlier on Wednesday, Premier League side Manchester City got through to the knockout stage after beating Olympiakos 1-0 away.

Phil Foden scored the only goal after 36 minutes when he slotted in from Raheem Sterling’s delightful back-pass, as City advance with two games to spare.

The other game of group C saw Porto defeat Marseille 2-0 away to keep up on second spot in the group.

In group, Inter Milan were defeated 2-0 at home by Real Madrid, while M’gladbach thrashed Shakhtar Donetsk 4-0 to maintain top spot in the group.

In group A, champions Bayern Munich cruised past RB Salzburg 3-1 to maintain their winning run in the competition and sealing their spot in the knockout round.

Atletico Madrid played a goalless draw with Locomotiv Moscow in the other game of the group.