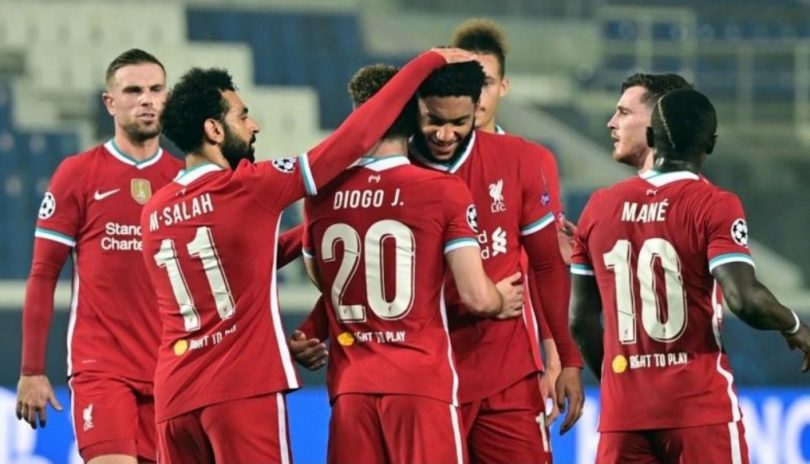 English Premier League champions, Liverpool thrashed Serie A side Atalanta 5-0 in the Champions League on Tuesday to maintain their perfect start to the competition.

The Reds, 2018-19 champions, have won all three Group D games without conceding a goal.

Victory in one of their remaining three group fixtures should be enough to take the Jurgen Kloop team through to the knockout stages.

A hat-trick by in-form Diogo Jota and a goal each by Sadio Mane and Mohamed Salah gave the Reds the victory in Italy.

In the group’s other game, Dutch team Ajax, who were not with over 10 players that tested positive to coronavirus, defeated Midtgylland 2-1 to go second on the standings.

At Bernabeu, Real Madrid clinched their first win in the competition this season as they overcame Inter Milan 3-2 in Group B.

Victory for the Zinedine Zidane side took them third with four points, having picked up a draw and defeat in their opening two games.

German Bundesliga side, Monchengladbach are top of the group with five points after thrashing Shakhtar Donetsk 6-0 in Ukraine on Tuesday night.

In Group A, Bayern Munich maintained their perfect start in their defense of the title with a 6-2 victory over RB Salzburg. Locomotive Moscow and Atletico Madrid played a 1-1 draw.

In group C, Manchester City and Porto both secured 3-0 victories against Olympiakos and Marseille respectively. City are top of the group, followed by Porto.