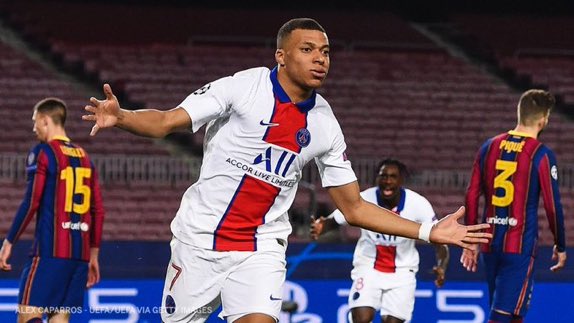 Kylian Mbappe scored a hat-trick for Paris Saint-Germain in their 4-1 Champions League round-of-16 win against Barcelona at Camp Nou.

The game, which was the first leg of the tie, saw Lionel Messi open the scoring in the 27th minute from the spot but the visitors pulled off an incredible comeback.

Mbappe leveled on 32 minutes as both sides stood 1-1 at halftime. The France international then scored two more goals, with Moise Keane scoring in between.

Mbappe became only the third player to score a Champions League hat-trick against Spanish giants Barcelona.

The second leg of the tie takes place on 20 March in Paris, with Neymar expected to be back from a thigh injury to face his former club.

In another Champions League clash on Tuesday night, Liverpool defeated RB Leipzig 2-0 having the advantage ahead of the Anfield return leg.

After a goalless first half, Mohamed Salah and Sadio Mane scored in the 53rd and 58th minutes respectively to get the win for the Reds.

The Jurgen Klopp side ended their poor recent run with the confidence-boosting away victory in Budapest’s Puskas Arena because of Covid-19 restrictions in Germany.