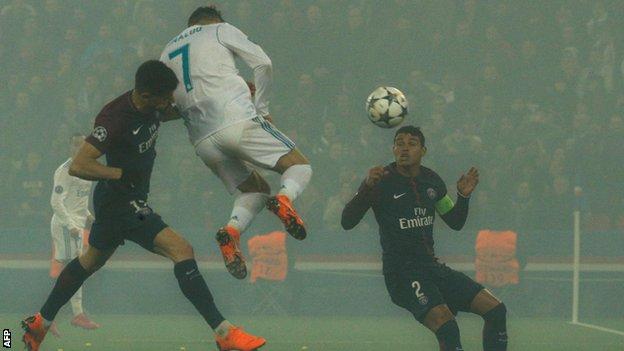 Defending champions, Real Madrid have qualified for the quarterfinal of the UEFA Champions League after beating Paris Saint-Germain on Tuesday to win 5-2 on aggregate.

Leading 3-1 from the first leg, Real took the challenge to their hosts and held on to a goalless first-half finish.

Zinedine Zidane’s men then got ahead and extended their lead when Cristiano Ronaldo headed in Lucas Vazquez’s cross in the 51st minute.

PSG continued to miss chances at goal, and had midfielder Marco Verratti sent off for two bookable offences.

Read also: Serena makes declaration on return to the courts after childbirth

Edinson Cavani then pulled a goal back to level both sides on 71 minutes, but Casemiro’s heavily deflected strike sealed Real’s victory.

This is the second successive season where the Ligue 1 leaders have gone out at the last-16 phase, although they were without injured forward Neymar.

Madrid are now into the Champions League quarter-finals for an eighth successive season and remain on course for a third title in a row.

In the other round of 16 game played on Tuesday, Liverpool were held to a goalless draw by Porto at Anfield; but advanced to the next round having beaten the Portuguese side 5-0 in the first leg.

Serena makes declaration on return to the courts after childbirth