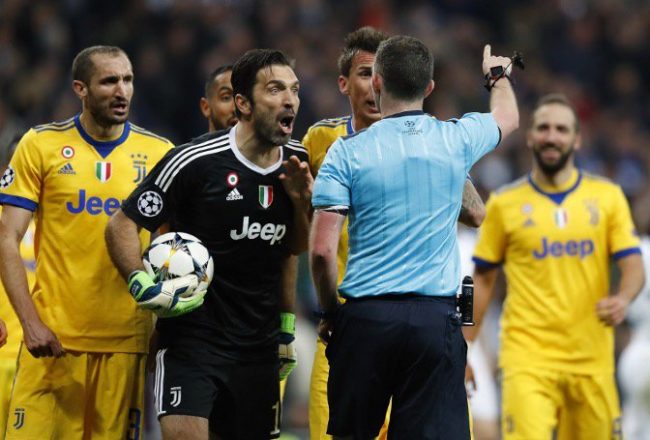 Juventus goalkeeper Gianluigi Buffon has been charged by UEFA over comments he made about English referee Michael Oliver after his side’s Champions League defeat by Real Madrid last month.

The veteran shot stopper was sent off after Oliver awarded Real Madrid a controversial penalty in added time in the second leg of their quarter-final tie in Madrid. A decision that caused the Italian champions to lose 4-3 on aggregate.

After the game, Buffon told reporters that “a human being cannot destroy dreams like that at the end of an extraordinary comeback on a dubious situation,” referring to Oliver.

He added: “Clearly you cannot have a heart in your chest, but a bag of rubbish. On top of that, if you don’t have the character to walk on a pitch like this in a stadium like this, you can sit in the stands with your wife, your kids, having your drink and eating crisps.

“You cannot ruin the dreams of a team. I could’ve told the referee anything at that moment, but he had to understand the degree of the disaster he was creating.

“If you can’t handle the pressure and have the courage to make a decision, then you should just sit in the stands and eat your crisps.”

UEFA announced on Friday that Buffon has been charged with breaching their “general principles of conduct” after his outburst against the referee.

The European football body also charged Buffon for the red card. The case will be dealt with on 31 May.