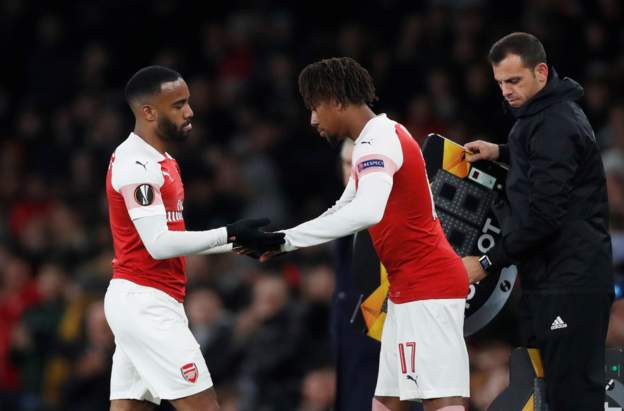 Super Eagles forward, Alex Iwobi played as a substitute for Arsenal in their Europa League quarterfinal clash against Napoli at the Emirates.

The Gunners look in good shape to reach the competition’s semi-finals after deservedly beating the Serie A side 2-0.

Aaron Ramsey put the hosts ahead in the 14th minute after he converted Ainsley Maitland-Niles’ pass to finish off a good team move.

10 minutes later, Kalidou Koulibaly scored an own goal when he deflected Lucas Torreira’s shot to double the lead for Arsenal.

Napoli, second in Serie A, will host the Unai Emery side next Thursday in Naples for the second leg of the tie.

Read Also: ‘Our performance at PSG gives us hope against Barca’

Another English side, Chelsea, were also in action in Prague.

A late goal by Marcos Alonso secured a 1-0 victory in the first leg for the Blues against Slavia Prague.

The goal came four minutes from time after Alonso timed his run perfectly to meet Willian’s right-wing cross with a firm header.

Both teams meet again at Stamford Bridge for the decider.

Elsewhere, Nigeria young forward, Samuel Chukwueze played throughout for Villarreal, who were beaten 3-1 at home by fellow Spanish side, Valencia.

And in Lisbon, Portugal, Benfica thumped German Bundesliga side, Frankfurt, who were reduced to 10 men during the course of the game.

Benfica go into the second leg with a 4-2 advantage.