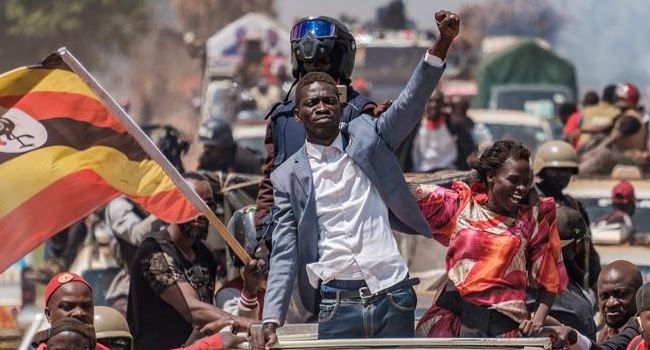 A military court in Uganda has charged no fewer than 49 aides of embattled presidential candidate, Bobi Wine with illegal possession of four rounds of ammunition in a ruling which comes a week before general elections.

Those charges by the military court with illegal possession of ammunition include; Bobi Wine‘s top bodyguard Edward Ssebuwufu and musician Nubian Li, a close confidant and singing partner, of the presidential candidate.

Their lawyer told the BBC on Saturday that a prisons bus meant to drive the accused to court to sign their release documents on Friday instead took them to the military barracks where they were charged.

According to reports, those charged by the military court were among about 100 people arrested by security operatives over a week ago on the Lake Victoria island of Kalangala.

This came a day after the Inspector General of the Ugandan Police Force, Martins Ochola, warned voters, ahead of the January 14 presidential elections that they will regret being born if they ferment any trouble before, during and after the elections.

According to Africa News, Ochola made the statement on Friday, January 8, in a statement where he warned the electorates against hanging around polling stations after casting their ballots in next week’s presidential vote or they would “regret why they were born.”