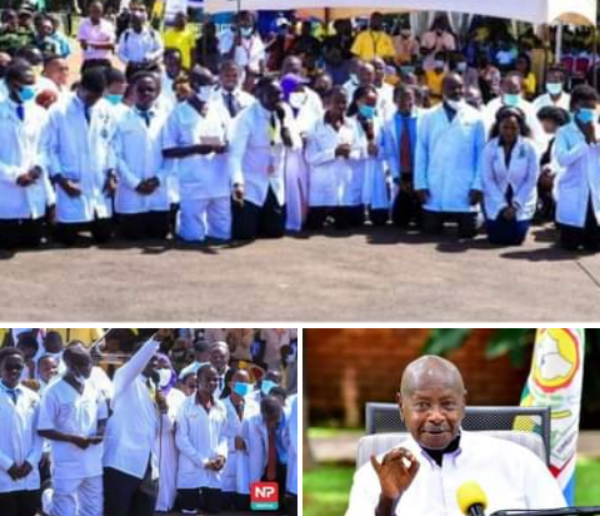 Doctors in Uganda on Monday, threw caution to the wind by kneeling before President Yoweri Museveni, begging him to seek reelection as the country’s president in 2026, to make it a seventh consecutive term.

The doctors, under the aegis of the Uganda Medical Association (UMA), who paid a courtesy visit to the President, were seen kneeling to plead with him to consider running again when his present tenure ends.

The Chairman of the UMA, Samuel Oledo, who led the team to visit the 78-year-old Museveni, was seen in a video leading other members of the association to applaud Museveni for “transforming the country’s health sector and improving the welfare of medical practitioners.”

“Your excellency, thank you. You have uplifted us medical practitioners. We kneel before you after assessing that you are capable. We have assessed that you have the power.

“You have everything needed. Help us and contest again in 2026 and take us ahead as you secure our future. We want Uganda to reach where God expects it to be,” Oledo said.

However, other top officials of the association has distanced itself from what they described as the disgraceful acts of their Chairman and other members by kneeling before the President who has been in power since 1986.

“Uganda Medical Association has always engaged with Museveni through formal, professional ways including appreciating him through our annual awards. The act of kneeling by Dr. Oledo and the team doesn’t represent Modus Operandi of the Association,” the association’s Deputy Chairman, Edith Nakku-Jolaba, and Secretary General, Herbert Luswata, said, insisting that Dr Oledo spoke for himself and not in the interest of the association.

“The members are already calling for an extraordinary assembly so that they can cast a vote of no confidence on Dr. Oledo. According to the constitution we have, NEC can initiate the meeting,

“However, the members can also write to me as Secretary General asking for this extraordinary assembly. I have not seen any other official documents from our members, apart from phone calls and WhatsApp messages,” Luswata stated.

Related Topics:MuseveniUgandan doctors
Up Next