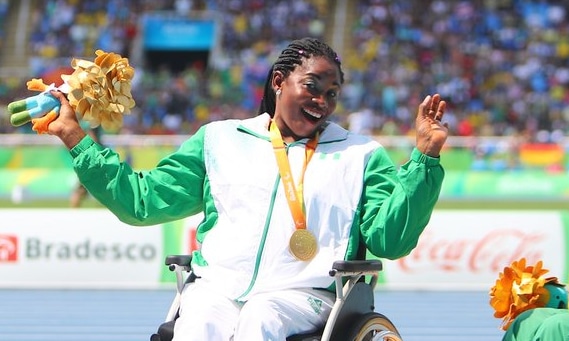 Ugwunwa threw a Season’s Best of 19.39m on her fifth attempt, and was the only athlete to go over the 19m mark on the day, winning the event to make it two consecutive titles since debuting at the Games in 2016.

Also she was the last Nigerian athlete competing in Tokyo, and being a favourite, she knew the weight of expectations on her shoulders, wrapping it up in style winning Nigeria’s 10th Paralympic medal in Tokyo.

Uzbekistan’s Nurkhon Kurbanova led with 18.38m and had completed her throws, before Ugwunwa took to the field. Ugwunwa on her first attempt, matched Kurbanova’s best mark, and then went into the lead on her second attempt throwing 19.08m.

In the women’s F40 Shot Put, Lauritta Onye was the second Nigerian athlete to get on the podium on Saturday, finishing 3rd to settle for Bronze with a Season’s Best throw of 8.29m.

She relinquished her Paralympic title and the former record which stood at 8.40m, but Polish athlete and World Record holder, Renata Sliwinska was in a league of her own, throwing a new PR of 8.75m to win GOLD.

Tunisia’s Nourhein Belhaj threw a new Personal Best of 8.33m to get the Silver medal as Onye got Bronze with 8.29m.

Powerlifting accounted for the most, six: three gold, one silver and two bronze medals.

Then three in Athletics: one gold, two bronze medals and table tennis with one bronze.

With the games coming to a close on Sunday, Team Nigeria currently occupy 31st position on the medal table.