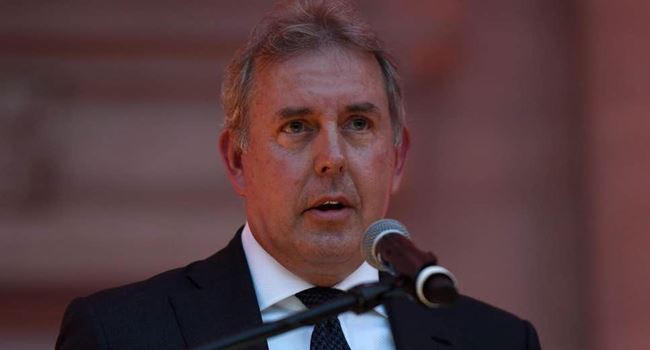 The UK ambassador to the US, Sir Kim Darroch, has resigned after diplomatic row between the US and UK following his leaked unflattering assessment of the administration of President Donald Trump which he described as “inept”.

In a letter to Simon McDonald, the most senior official at the Foreign Office, Darroch said the row, in which Trump has called the ambassador “a pompous fool” and “very stupid”, meant he could not continue.

“Since the leak of official documents from this embassy there has been a great deal of speculation surrounding my position and the duration of my remaining term as ambassador,” he wrote.

“I want to put an end to that speculation. The current situation is making it impossible for me to carry out my role as I would like”, he said.

In response to Darroch’s letter, McDonald said that he accepted the resignation with “deep personal regret” and praised him for behaving throughout the controversy “as you have always behaved over a long and distinguished career, with dignity, professionalism and class”.

McDonald added: “The prime minister, foreign secretary and whole of the public service have stood with you: you were the target of a malicious leak; you were simply doing your job. I understand your wish to relieve the pressure on your family and your colleagues at the embassy; I admire the fact that you think more of others than yourself.”

Speaking in the House of Commons shortly after the news emerged, Theresa May praised Darroch for “a lifetime of service to the United Kingdom”. She added: “We owe him an enormous debt of gratitude. I hope the house will reflect on the importance of defending our values and principles particularly when they are under pressure.”

The confidential memos from Kim Darroch leaked to the Daily Mail newspaper that annoyed the US president and embarrassed London, quoted the UK ambassador to have said Trump’s presidency could crash and burn, ending in disgrace according to a cache of secret cables and briefing notes sent back to Britain.

The paper said the most damning comments by Darroch described Trump, who was received by Queen Elizabeth II during a state visit to Britain just last month, as insecure and incompetent.