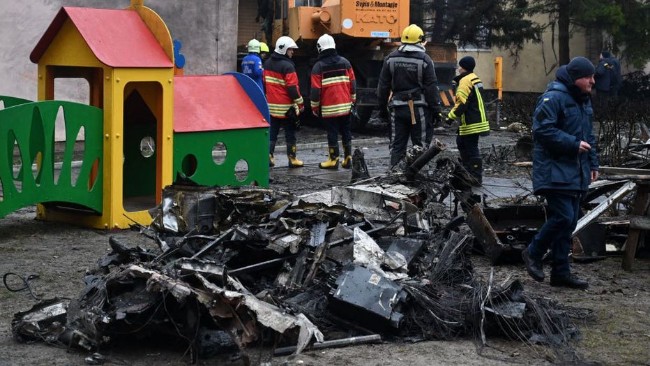 No fewer than 16 people, including Ukraine’s interior minister and three children, have been killed in a helicopter crash near a nursery outside the capital, Kyiv, on Wednesday.

According to emergency services, Interior Minister, Denys Monastyrskyy; his deputy, Yevhen Yenin and State Secretary of the Ministry of Internal Affairs, Yurii Lubkovych, were among the victims of the unfortunate incident.

While the details of the crash remain sketchy, the State Emergency Service of Ukraine (SESU) said in its latest update the death toll stood at 16, including three children.

It was also learnt that no fewer than 30 people were wounded, including 12 children.

“There were children and staff in the nursery at the time of this tragedy,” Oleksiy Kuleba, governor of Kyiv region, wrote on Telegram.

“Children from the kindergarten are in another educational institution, and relevant services are working with them,” he added.

“Today, a terrible tragedy occurred in Brovary, Kyiv region. A SES [State Emergency Service] helicopter crashed, and a fire broke out at the crash site. The pain is unspeakable,” he said in a statement on social media.

Deputy head of the Ukrainian presidential office, Kyrylo Tymoshenko, said in a briefing that the helicopter was going to one of the “hot spots” of the war with Russia.

While noting that more details will be provided later, Tymoshenko said: “For now, we are considering all possible versions of the helicopter crash accident.”