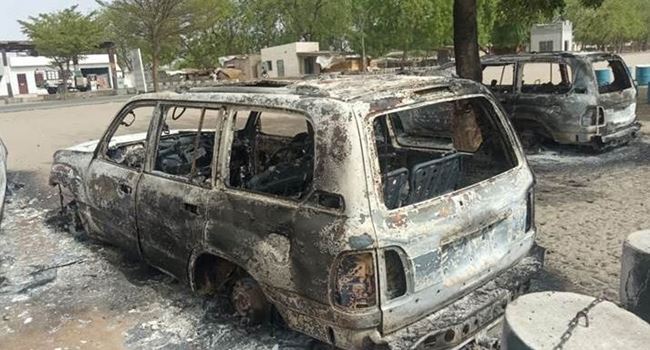 Kallon, in a statement on Sunday said that many civilians, including a four years old girl were killed, 37 others injured, and that properties at a major UN facility were also destroyed during the attack.

Ripples Nigeria on Saturday reported the gun battle between ISWAP terrorists and Nigerian soldiers following the insurgents’ attack on Monguno.

But giving more details to what happened during the attack, Kallon said, “I am deeply saddened by the news that many civilians, including an innocent child, lost their lives in these horrific attacks.”

Kallon, who expressed condolences with the families of the victims and injured persons, said he was appalled by the continued violent attacks launched by non-state armed groups in civilian areas in Borno State.

He said, “On 13 June, non-state armed group operatives aboard light trucks mounted with heavy artillery raided Goni Usmanti community in Nganzai LGA before penetrating the town of Monguno around 11.45 a.m. from two different entry points, resulting in clashes with the military which lasted for about two hours.

“The armed assailants reached the humanitarian hub, where over 50 aid workers were present at the time of the attack.

On the affected UN facility he said though the facility only sustained light damage, that initial reports indicate it was directly targeted and an unexploded projectile was found at the gate.

He added that vehicles of the UN and other international organisations were set ablaze, same as humanitarian offices and accommodation.

According to him staff inside were not harmed due to protective security measures deployed at the hub of the facility.

“I am relieved all staff is safe and secure, but I am shocked by the intensity of this attack.

“It is the latest of too many clashes affecting civilians, humanitarian actors, and the assistance we provide.

“Civilians and aid workers, their facilities and assets should never be a target and must be protected and respected at all times. I continue to call on all parties to respect and protect civilians and humanitarian personnel in accordance with international humanitarian law,” Kallon said.

He also recalled past attack on UN facilities saying: “On 18 January, another humanitarian hub in the town of Ngala, near the border to Cameroon, was the target of a complex assault by non-state armed groups.

“An entire section of the facility was burned down as well as one of the few vehicles UN agencies rely on for the delivery of aid.

“Humanitarian hubs, managed by IOM for the humanitarian community, are critical to reaching the most vulnerable in insecure areas in Borno State.

“They enable aid workers to deliver assistance and carry out life-saving activities in remote locations amid challenging operational environments.

“Such incidents impede the ability for aid workers to stay and deliver assistance to the people most in need in these remote areas. Twenty-five aid organizations are providing assistance to more than 150,000 internally displaced persons in the town of Monguno, in the north-eastern part of Borno State.

“The United Nations and NGO partners in Nigeria are working to bring urgent aid and curtail the spread of COVID-19 in the north-eastern states of Borno, Adamawa, and Yobe where 10.6 million people are in need of assistance.”