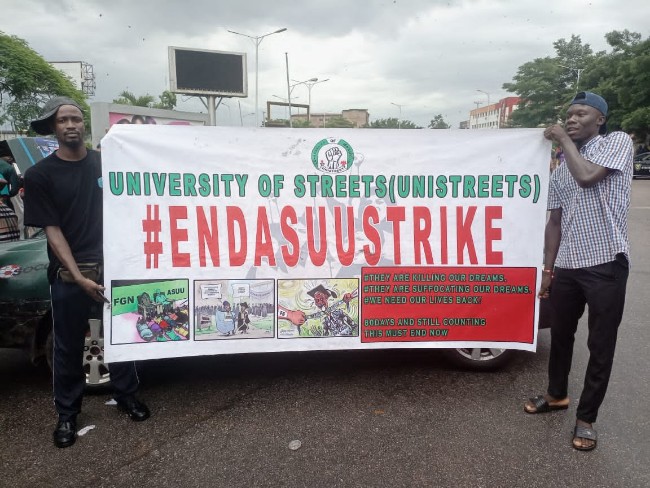 A number of students of the University of Benin, Edo State, on Wednesday staged a massive protest over the ongoing industrial action by the the Academic Staff Union of Universities (ASUU).

Similar instances had happened in places such as Abuja and Ibadan where students demanded the immediate reopening of public universities in the country.

Students were pictured raising placards displaying several sentences that communicated their anger over the situation.

It would be recalled that several attempts by the students, such as the one in Lagos on Tuesday, to further demand an end to the strike have been stymied by security agencies.

It is almost four mouths now that the Union embarked on its industrial action over the non-challant attitudes of the Federal Government about public education across the country.

The reasons given for the strike among others is government’s lack of commitment to the payment of earned academic allowance, issues bordering on the use of the Integrated Personnel Payroll Information System and Universities Transparency and Accountability Solution, among others.

The Union extended its one-mouth strike following what it said was government’s lack of concern for their demands.

Related Topics:ASUUUNIBEN students
Up Next

Ekiti postpones resumption of schools to May 9