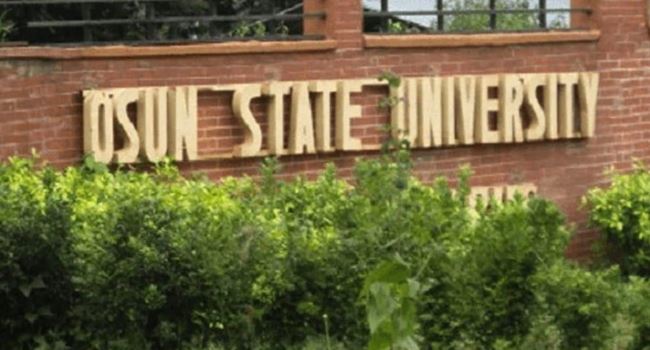 The management of Osun State University (UNIOSUN), Osogbo, has directed all newly admitted students who are below the age of 16 to either defer their enrollment or seek a refund of their school fees.

The students affected were those offered admission into the 2020/2021 academic session by the Joint Admission and Matriculation Examination Board (JAMB).

Ripples Nigeria gathered that over 100 students were affected, given the Federal Government’s age policy for new students seeking admission into higher institutions in Nigeria.

According to a statement by the Public Relations Officer of the university, Ademola Adesoji, on Tuesday, the Vice-Chancellor of the school, Prof. Labode Popoola, said the institution would not compromise its admission policy for underaged students.

Adesoji said, “The 2020 Brochure for UTME states that the candidate must have attained the age of 16 years or would have done so on the first day of October in the year of his/her candidature.

“TheVice-Chancellor of the institution, Prof. Labode Popoola, had explained that even though some candidates that were underage as at the period stated in the 2020 brochure of the UTME erroneously found their way in the system, UNIOSUN, in its mercy, had concluded to defer the admissions of such candidates till they attain the required age, or they seek a refund, which would not allow them automatic admission to the institution.”

The institution also dismissed claims of an increase in school fees, saying the university had not increased its school fees since the year 2017.

However, some parents of the affected students have alleged that this is a purported plan by the school to collect money from unsuspecting members of the public who were seeking admission into the institution.

Read also: UNIOSUN students in violent protests over disappearance of their colleagues

A parent of an affected student who spoke with Ripples Nigeria argued that the school would have prevented the students from registering for admission if they truly wanted to adhere to the age policy.

According to the parent who pleaded anonymity, the school has offered to refund the school fees to those who have paid school fees but can’t continue with the process because of the policy, but didn’t say anything about the refund of other expenses incurred in the process.

“The school said they would refund school fees but didn’t say anything about refunding other expenses like the money spent on registration, and other expenses. If they knew there was a policy like that, they would have prevented the students from applying in the first place,” the parent said.

Another parent who also preferred anonymity said the school should be apologizing rather than say it was refunding the paid school fees in “it’s mercy” if the students decided not to go ahead with the enrollment.

The parent said, “If not that we are in a nation like Nigeria, why would a school like UNIOSUN say it would refund school fees “in its mercy.” Where is that done? You put students through stress just to register, then take school fees plus other fees, then turn back and say they can’t enroll.

“Upon that, you are now saying you are going to refund the school fees out of “your mercy” if they didn’t want to continue. That’s irresponsibility on their part. I believe this cannot happen in any other part of the world except in Nigeria and if our system works the institution should pay damages and JAMB should also not go scot-free.”

Meanwhile, a staff of the school who simply identified himself as Mr. Alade, said JAMB should be bear the full blame for the unfortunate development.

“That leaves the school with no other option than to take the necessary steps to make sure that the policy by the Federal Government is adhered to by every student no matter who was involved. Aggrieved parents and students should channel their grievances to JAMB.”

Also, a student who was affected by the incident said he felt bad that his efforts were put to waste although it would have been avoided, noting that the development could set him back academically.