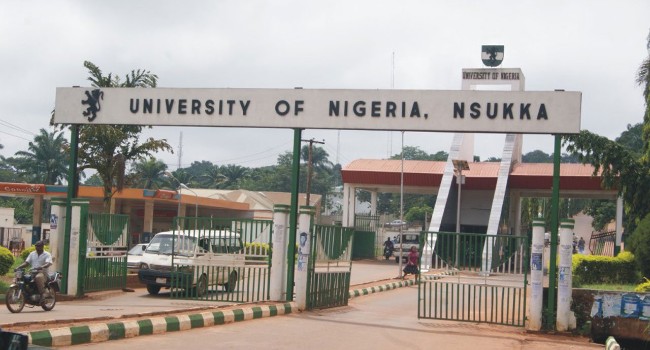 The management of the University of Nigeria, Nsukka, (UNN) on Thursday suspended 15 staff of the institution over their alleged involvement in sexual misconduct and admission racketeering.

The affected staff are already facing an investigative panel set up by the university and risk dismissal or prosecution if found guilty by the panel.

The Spokesman of the UNN, Dr. Okwun Omeaku, confirmed the development in a statement.

Read also: LAUTECH lecturers threaten to embark on strike over non-payment of salaries

He said: “Not less than 15 members of staff have been suspended for their alleged involvement in job, admission racketeering, and sexual harassment.

“The eagle is still watching and many people are on the radar.”

The Vice-Chancellor of the institution, Prof.Charles Igwe, also confirmed the staff suspension, saying “there is no hiding place for any staff or student who hide under any guise to carry out activities capable of reducing the image of the university in the estimation of the right-thinking members of society.”

“We are determined to restore the values we are known for. We are ready to deal with lecturers and other staff who take pleasure in victimising students in any form. We thank God that the Senate of the Federal Republic of Nigeria has mooted the idea of passing legislation setting out a five-year jail term for anyone found to demand sexual gratification from students in our tertiary institutions. We are determined to fight the scourge here in UNN.”

Doctors to address problems of brain drain, others at workshop

Drama as Maina goes to court in wheelchair, awaits ruling on bail application