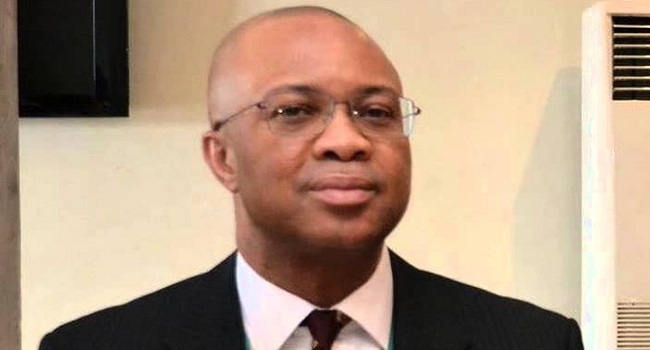 Akabueze stated this while addressing chief executive officers of Government-Owned Enterprises, GOEs, in Abuja on Tuesday, putting revenue not remmitted by Federal Government organizations at about N2.81 trillion.

The figure represents unremitted revenue from about 50 defaulting GOEs in the current year, as well as those brought forward from previous years.

Speaking at the meeting with the Chief Executive Officers of GOEs, Akabueze said the country was battling a shortfall in revenue which is worsened by failure of Federal Government organizations to remit about N2.810 trillion.

According to him, key reforms would be implemented with increased vigour to improve revenue collection and expenditure management.

Introducing the new Revenue Performance and Management Framework to the CEOs, the D-G said that Executive Order 2, 2017 must be strictly adhered to, forthwith.

The Executive Order 2 of 2017 mandates Government owned Enterprises (GOEs) to: Submit 3-year Revenue and Expenditure Estimates & Annual Budget Estimates to accompany the FGN Budget proposals to the Federal Ministry of Finance/Budget Office of the Federation for: review, verification and transmission to the National Assembly.

In order to operastionalise EO2 and the framework, the Federal Government would determine the Key Performance Indicators for GOEs and ensure quarterly remittances of Operating Surpluses, the D-G said.

Akabueze also condemned the practice by the GOEs, in which he said the Federal Government had invested over N40 trillion, over the years but failed to provide revenue support for government expenditure.

He said: “Despite huge sums the Federal Government has invested (circa N40 trillion) in these agencies, what is usually remitted to the Treasury in terms of dividend or surplus at the end of each operating year is mostly insignificant.

“The record shows that few of the GOEs declare surpluses. In effect, the Nigerian tax payers/general public have not benefited much from these investments in the agencies.”

“Out of the total projected sum of N847.95 billion Independent Revenues in 2018, only N302.66 billion, representing 36.8% performance, had been achieved by September this year.”

He further added that the framework also provides for instituting corporate governance in each GOE to enhance practices, including performance contracts for Chief Executive Officers (CEOs) and other key Management staff; Set financial indicators and targets for each GOE; Monthly publication of revenue and expenditure performance for all GOEs.

According to him, it also included a quarterly publication of each GOE’s Budget Performance.

The Budget Office DG further revealed that annual GOE capital budgets would now be “mainstreamed into the Federal Government’s Capital Budget in order to ensure that they are subjected to the same level of scrutiny, procurement and monitoring processes.”

Continuing, Akabueze said that budget and financial reporting requirements of the enterprises would include mandatory use of the Treasury Single Account, TSA, for all financial transactions; quarterly remittances of interim operating surplus by the GOE to replace the annual remittances while cumulative remittances at the end of the year would be reconciled to amount due after; and a provision that Accounts of GOEs, henceforth , be audited within four months after the end of each financial year.

“The computation of the operating surplus shall be reviewed to allow the deduction from the agency’s revenues of only operational expenses, wholly, reasonably and necessarily incurred in its operations,” he added.