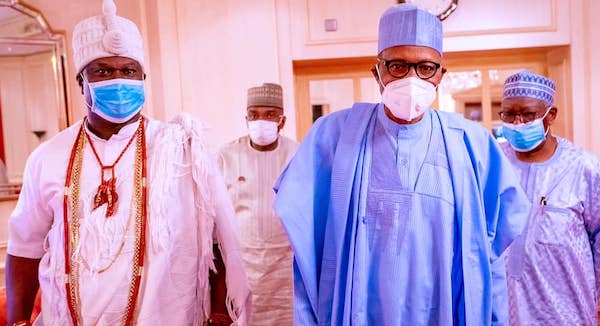 President Muhammadu Buhari held a closed-door meeting with the Ooni of Ife, Oba Adeyeye Ogunwusi, at the Presidential Villa, Abuja, on Wednesday.

The meeting was also attended by the Chief of Staff to the President, Prof. Ibrahim Gambari.

Although issues discussed at the meeting have not been made public, it may not be unconnected with the recent crises in the South-West over the activities of Fulani herdsmen in the region.

Sources privy to the meeting said it was initially slated for next month but pushed forward to Wednesday because of the latest development in the South-West.

However, the Nigeria Governors Forum (NGF) had dismissed the report and claimed that the Ondo governor was quoted out of context by a section of the media.

The crisis was escalated on Friday when a grassroots politician in Oyo State, Sunday Adeyemo, aka Sunday Igboho, led a group of youths to Igangan, Ibarapa North local government area of the state to eject the head of Fulani settlement and some herdsmen in the town.

At least two persons were killed and properties worth several millions of naira were destroyed in the incident.

The incident forced the Inspector-General of Police, Mohammed Adamu, to order Igboho’s arrest and immediate transfer to Abuja for questioning.

The South-West governors met the leadership of the Miyetti Allah Cattle Breeders Association of Nigeria (MACBAN) on Monday and agreed to ban open grazing in the region.

The governors also reaffirmed their commitment to the protection of lives and properties in the South-West.

Related Topics:BuhariSouth-West unrest
Up Next