Home » Latest » UPDATED… One person dead, as train rams into bus in Lagos 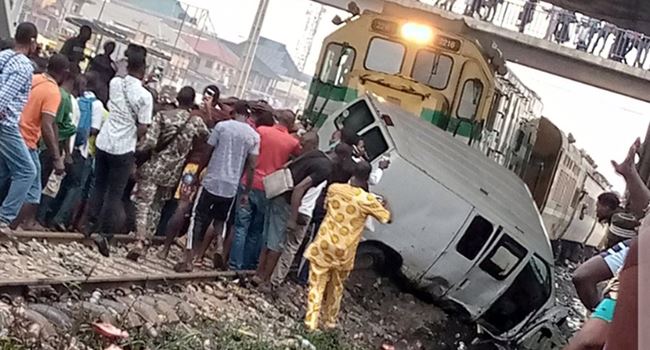 An injured passenger has lost his life, just after being rescued by the Lagos State Emergency Management Agency (LASEMA) after a train collided with a passenger bus in the Oshodi area of Lagos State.

The corpse of the passenger has been placed in the Lagos State University Teaching Hospital (LASUTH) morgue, while others injured in the accident, are still receiving treatment.

The tragedy which left an unidentified driver and a lot of passengers injured happened on Monday morning in Lagos as the commercial bus collided with the moving train, while trying to cross the rail line.

According to the head of Public Affairs, LÀSEMA, Nosa Okunbor, the agency which had cleared the accident scene, later discovered that another vehicle was involved in the accident.

He said “As at 10a.m, additional investigation revealed a second vehicle’s involvement. A highlander JEEP was also discovered to be involved in the collision and its two adult male passengers sustained severe injuries before being transported to the Lagos State University Teaching Hospital, LASUTH,” he explained.

Okunbor added that the recovery operation was concluded, as the accident vehicle was recovered off the road with the aid of the agency’s life rescue equipment, management measures were put in place by the emergency responders, alongside task force officials and Nigeria Police.