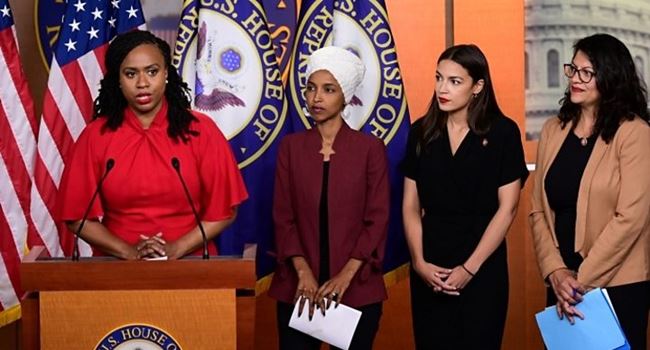 The four Democratic congresswomen who were attacked by US President Donald Trump in racist tweets over the weekend have called on the President to focus on issues bothering the nation.

According to the four women Alexandria Ocasio-Cortez, Ilhan Omar, Ayana Pressley and Rashida who spoke jointly on Monday, Trump’s attacks are a “distraction” from his policies, and encouraged people to not “take the bait”.

The congresswomen said they will “not be silenced”, and instead turned their attention to the treatment of immigrants detained at the border, healthcare and education, among other issues.

“This is simply a disruption, a distraction from the callous, chaotic and corrupt culture of this administration,” said Pressley.

“We want to get to the business of the American people and why were sent here: reducing the costs of prescription drugs, addressing the public health crisis and epidemic that is gun violence, addressing the racial wealth gap and yes, making sure that families stay together.”

The women were responding to a series of racists tweets and comments by the US president on Sunday and Monday in which he told the congresswomen to go back to where they came from.

Donald Trump was on Sunday slammed for attacking a group of Democratic congresswomen on Twitter, telling them to go back where they came from despite being American citizens.

However, Trump did not name the women, but he was referring to Alexandria Ocasio-Cortez of New York, Ilhan Omar of Minnesota, Ayanna Pressley of Massachusetts and Rashida Tlaib of Michigan.

“So interesting to see ‘Progressive’ Democrat Congresswomen, who originally came from countries whose governments are a complete and total catastrophe, the worst, most corrupt and inept anywhere in the world (if they even have a functioning government at all), now loudly and viciously telling the people of the United States, the greatest and most powerful Nation on earth, how our government is to be run,” said Trump on Twitter.

“Why don’t they go back and help fix the totally broken and crime infested places from which they came,” he added.