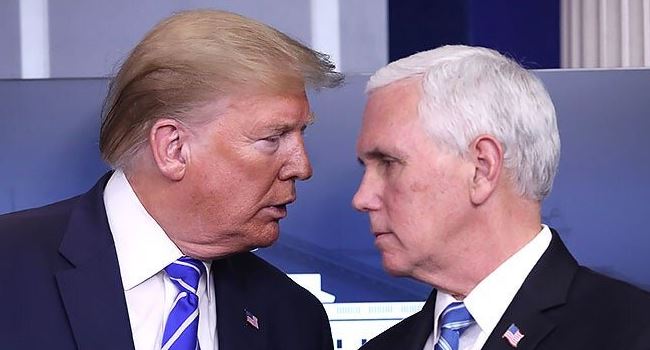 Democrats in the United States Congress have piled up the pressure on Vice President Mike Spence, to act up to remove President Donald Trump from office over his role in the Capitol Building riots that occurred on Wednesday, January 6.

Leading the call was House Speaker Nancy Pelosi, who sent a letter to the lawmakers on Sunday, January 10, saying House is expected to bring up a resolution asking Pence to invoke the 25th Amendment to declare the president unfit for office and that if the president refuses to step down, the Democrats will vote to impeach him.

Trump, on his part, has continued to accuse the Democrats over the riot which claimed five lives including a Capitol police officer.

According to the BBC, Pelosi wrote to lawmakers saying the House of Representatives would present a resolution on Monday, January 11, to formally request that Pence invoke the 25th Amendment to the Constitution, adding that the House could vote on the resolution on Tuesday.

After that, Pence and the cabinet would be given 24 hours to act before the House’s potential move toward impeachment.

“We will act with urgency, because this president represents an imminent threat to both. The horror of the ongoing assault on our democracy perpetrated by this President is intensified and so is the immediate need for action,” Pelosi said in her letter to Congress.

Meanwhile, a second Republican Senator, Pat Toomey of Pennsylvania, said the president should “resign and go away as soon as possible.”

The House Democrats have vowed to press ahead quickly with the impeachment. To impeach the president, in this context, means to bring charges in Congress, and Pelosi said Democrats could introduce a charge of “incitement of insurrection” against Trump.

Senior lawmakers say a vote to impeach Trump in the House could then be held by mid-week and if it succeeds, Trump could become the only president in US history to have been impeached twice.